Founder and owner of Quackworks(comic series).

Use the Waddlemeyer Ramrod in order to rob every bank in the world.

Get revenge on Darkwing Duck (both failed).

Taurus Bulba, later known as the Steerminator, is a major antagonist in Darkwing Duck. He is a big, fearsome, power-hungry bull who, at the beginning of the series, controls the criminal underworld of St. Canard. He is the very first villain Darkwing Duck fights onscreen, though canonically he is the second villain that Darkwing faces, behind Megavolt. He is also the main antagonist of the first arc of the Darkwing Duck comic book series.

He was voiced by Tim Curry, who also played several villains such as Professor Calamitous in Jimmy Neutron: Boy Genius, Hexxus in FernGully: The Last Rainforest, Frank-N-Furter in The Rocky Horror Picture Show, Long John Silver in Muppet Treasure Island, Farley Claymore in The Shadow, Lord of Darkness in Legend, Pennywise the Dancing Clown in the original film adaptation of Stephen King's It, Billy Flynn in Criminal Minds, Ben Ravencroft in Scooby-Doo and the Witch's Ghost, The Goblin King in Scooby-Doo and the Goblin King, King Chicken in Duckman, General Von Talon in Valiant, Evil Manta in The Little Mermaid, Dr. Slicer in Recess, Belial in The Legend of Atlantis, Anatoly Cherdenko in Command & Conquer: Red Alert 3, Kilokahn in Super Human Samurai Syber-Squad, and Maestro Forte in Beauty and the Beast: The Enchanted Christmas.

Attempt to Steal the Ram Rod

Bulba's past is unknown, but he was serving a 99-year prison sentence for his crimes. Despite this, Taurus Bulba continued his schemes out of the prison itself through his minions Hammerhead Hannigan, Hoof, and Mouth, even stating that the prison was the perfect hideout (mostly due to the warden's incompetence).

During his stay, Taurus Bulba formulated a plan to steal the Ram Rod, a powerful weapon that could remove the gravity from any object it hit, before the army could get their hands on it. While his minions are stealing the weapon, Bulba (watching and communicating through a portable television carried by his pet condor Tantalus) witnesses Darkwing Duck attempting to stop them (although he does not recognize him) and orders Tantalus to dispose of him.

Once the Ram Rod had been stolen, Bulba (rather obviously) hid it inside of the prison's laundry room. However, he could not activate the weapon due to it requiring an arming code. As Hammerhead had mistakenly killed the Rod's creator, Professor Waddlemeyer, prior to stealing it, Bulba orders his minions to kidnap Waddlemeyer's granddaughter, Gosalyn, in hopes that she knew the code — and then planned to kill her afterwards.

After Darkwing Duck foils Hammerhead, Hoof, and Mouth and begins protecting Gosalyn, Bulba, with the Ram Rod secure, decides to directly confront Darkwing, and escapes, revealing that he had secretly turned the entire prison into an airship in his image. While flying above St. Canard, Bulba projects Morse Code down on the city, reasoning that Darkwing would know how to translate it (even claiming he "probably sleeps with a Boy Scout handbook under his pillow"), stating that he will only surrender to Darkwing Duck, also planning on having Tantalus pinpoint his location.

After Darkwing leaves his hideout on to of the St. Canard bridge, Bulba, watching him do so through the use of his condor and portable television, orders his minions to head to Darkwing's lair and kidnap Gosalyn, leaving him to face Darkwing himself. Darkwing soon arrives at Bulba's location, and Bulba, un-intimidated by Darkwing, casually states that his ego is out of control and that he has been manipulating him like a puppet. As Darkwing tried to attack him, Bulba crushes his body into a ball and, while the police arrive to arrest Darkwing (believing that he stole the Ram Rod), Bulba escapes and tells him that "I have a date on a bridge with a little girl.". This horrifies Darkwing, who realizes that Gosalyn is going to be kidnapped by Bulba, although he is helpless to stop it.

Later, Bulba brings Gosalyn aboard his airship and tries to force her into giving him the activation code, however, while this happens, Darkwing Duck and Launchpad McQuack assault the airship using the Thunder Quack and Darkwing manages to force his way inside. Darkwing manages to defeat Bulba's minions, although Taurus Bulba himself threatens to kill Gosalyn should he not surrender. On the top of the airship, Darkwing and Gosalyn reconcile, and Bulba, knowing that Gosalyn will never tell him the code, theorizes that she could have told Darkwing and threatens to have Tantalus drop her onto the street if he doesn't tell him. Darkwing, knowing the code (due to Gosalyn unknowingly singing it to herself), complies and activates the Ram Rod, allowing Taurus to use it to rob a gold storage.

As Darkwing demands Gosalyn to be freed, Taurus complies by having Tantalus literally free her by loosening his grip, although Launchpad saves her before she hits the ground. Now enraged, Darkwing begins messing with the controls on the Ram Rod to the point where it begins to malfunction, defeating Bulba's minions and allowing Launchpad and Gosalyn to take out Tantalus in the process. Bulba then grabs Darkwing and prepares to kill him. However, the Ram Rod explodes and supposedly kills both of them. Later, Darkwing, in his civilian identity of Drake Mallard, is shown to have survived the explosion (albeit greatly injured) and adopts Gosalyn.

Years later, FOWL's scientists manage to resurrect Taurus by turning him into a cyborg, intending to turn him into a FOWL top agent. Without second thoughts, Taurus blasts away the entire building, as he refuses the offer. Angrier than ever, he decides to take revenge on Darkwing Duck. After he kidnaps Gosalyn, he engages in his last fight with Darkwing that ends with him falling in a river. He is believed to be dead until he manages to fly away on a jet pack connected to his suit.

Later, upon Darkwing's return to crime fighting, Taurus Bulba is revealed to have rebuilt himself and has founded Quackworks as a means to rid the city of heroes and villains as well as to become the hidden ruler of St. Canard. He also seeks the Gizmoduck suit as a means of increasing his power, however, with help from his allies, Darkwing destroys Taurus' newest body and while trying to escape, fights him again as he has returned in another body. Fortunately, Gosalyn (using the Gizmoduck suit) permanently deactivates Bulba's final body, resulting in his final demise.

It has been confirmed at the 2019 San Diego Comic-Con that Taurus Bulba will be appearing in Season 3 of the 2017 DuckTales series. 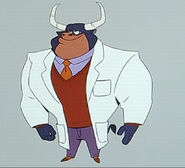 Taurus Bulba in the 2017 DuckTales reboot.
Add a photo to this gallery

Taurus Bulba's appearance is fairly straightforward. He is a tall, blue bull wearing a red suit top, a light-blue undershirt, a yellow necktie, purple pants, and black shoes. He is very beefy, hefty, and muscular in stature. He has long, sharp horns, typical of bulls, and appears to be drawn with the implication of having big lips. He also speaks with a prominent Russian accent, indicating that he is of European origin.

Bulba's personality implies him to be a greedy, ruthless, calculating, persuasive, vicious individual. He is the kind of person with whom anyone would not like to cross paths. He is also the only Darkwing Duck villain to be portrayed completely darkly and seriously, with very few humorous quirks to detract from his viciousness. Though he often acts as a polite, chivalrous, calm and sophisticated gentleman, deep down, all he really is, is a monstrous, sadistic, callous, menacing and wicked mastermind with no regard for anyone whom he has tortured, maimed, killed, or otherwise severely hurt. Compared to Darkwing's nemesis, NegaDuck, he is actually willing to use far more violent and immoral methods to get his way, even if it means harming or killing innocent children.

Retrieved from "https://villains.fandom.com/wiki/Taurus_Bulba?oldid=3892135"
Community content is available under CC-BY-SA unless otherwise noted.