NOTE: This article is about Taurus Bulba from Ducktales 2017. For the original incarnation from Darkwing Duck, see: Taurus Bulba.

Taurus Bulba is the main antagonist of the 2017 DuckTales reboot series episode "Let's Get Dangerous." He is based on his original counterpart.

He is voiced by James Monroe Iglehart.

Taurus Bulba was the head of his own research facility and boss of Dr. Thaddeus Waddlemeyer, who built the Ramrod, a device capaple of opening portals into other dimensions. However, Dr. Waddlemeyer discovered a dangerous flaw in the Ramrod and tried to warn Taurus, but through unknown events, he ended up getting trapped in another dimension, leaving behind his granddaughter, Gosalyn to try and figure out what happened. Taurus took advantage of the situation and took credit for creating the Ramrod on his own. 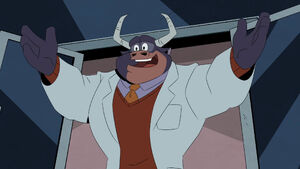 Retrieved from "https://villains.fandom.com/wiki/Taurus_Bulba_(DuckTales_2017)?oldid=4137439"
Community content is available under CC-BY-SA unless otherwise noted.