"My god-grandson" (by the Grand Saint of Nine Spirits)

Ruler of the Tiger's Jaws Cave

The Tawny Lion Demon (in Chinese: 黃獅精) is a lion demon king and and an antagonist of the 16th-century Chinese classic novel Journey to the West by the late Wu Cheng'en, and its multiple adaptations. He is known for stealing the weapons of Sun Wukong, Zhu Bajie and Sha Wujing. He was based in Tiger's Jaws Cave (in Chinese: 虎口洞), Leopard's Head Mountain (in Chinese: 豹頭山) in the Kingdom of Yuhua.

In the 1986 classic adaptation series, he was portrayed by the series' martial arts director Xiang Han.

The Tawny Lion Demon is one of the six lion demons near the Kingdom of Yuhua. When the Grand Saint of Nine Spirits (also known as the Nine Headed Lion) ascended to their location, they revered him as their god-grandfather. Though in the 1986 series, the King of Yuhua mentioned that the Tawny Lion Demon had assaulted the kingdom numberous times, in the novel it is made clear that he never knew him before the story takes place at all.

On one night, he saw a light in the kingdom and came there to search for the source of the light, and discovered Sun Wukong, Zhu Bajie and Sha Wujing's weapons. Overcome by greed, he stole them, and organized a banquet to celebrate it the next day. However, this proved to be the cause of his downfall: The owners of the weapons, disguised as his minions (and Sha Wujing as a duck owner), attacked his cave, burned it down to take back their weapons.

Angered, the Lion came to ask his god-grandfather for help, which the Grand Saint of Nine Spirits agreed. He, along with the Tawny Lion, and the other five lion demons, attack the Kingdom of Yuhua, and successfully captured Xuanzang, Bajie, Wujing and the royal family of Yuhua. However, the Tawny Lion Demon was killed during the battle. His death is the catalyst for the rest of the conflict between the protagonists and the Nine Headed Lion.

In the 1986 series, when the Lion came to ask his god-grandfather for help, the latter refused as doing so might getting into even further trouble with Wukong, knowing the monkey to be the one who assaulted Heaven 500 years ago. The Tawny Lion went out of the Grand Saint of Nine Spirits' cave in disappointment, only to met Wukong, who laughed at him, much to the Lion's anger. The two fought, and Wukong managed to kill the Lion, which later served as the catalyst for the conflict between the protagonists and the Nine Headed Lion.

There's no mention of the other five lion demons in this version. 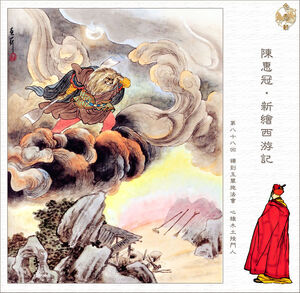 The Tawny Lion Demon in the novel.
Add a photo to this gallery

Retrieved from "https://villains.fandom.com/wiki/Tawny_Lion_Demon?oldid=3541674"
Community content is available under CC-BY-SA unless otherwise noted.