After Morando's betrayal against House Tarron

Help Morando return to Akiridon-5 so he could rule it with a iron fist (succeeded).
Eliminate House Tarron (failed).

The Taylon Phalanx was originally a military division created by King Fialkov and Queen Coranda to protect House Tarron and Akiridion-5. However, they instead chose to follow their general, Val Morando, when he committed high treason against the planet. As a result, they were banished from Akiridon-5 alongside Morando, who would hire the Zeron Brotherhood to kill Varvatos Vex's family so he could deceive him into lowering the shields.

After Varvatos Vex lowered the shields of Akiridion-5, the Taylon Phalanx, led by Morando, created a coup so the latter could claim the throne for himself. They manage to put the King and Queen into stasis, but despite their success, the King and Queen's children, Aja and Krel, are able to retrieve their life cores and escape into the Mothership with Varvatos Vex, while Zadra stays behind to keep the Taylon Phalanx from catching up. After the Mothership flies away, Morando kills one of his soldiers and hires various bounty hunters from across the galaxy to murder the Royals and give him the King and Queen's life cores so he could destroy them. Following this, Morando tortures Zadra to force her to become the next Commander of the Taylon Phalanx. She reluctantly does, though she also becomes a double-agent for the planet's Resistance.

In the process, the Taylon Phalanx becomes far more hostile and dangerous towards the citizens of the planet, with one of the soldiers trying to force a child to worship Morando by threatening the said child with death. When Morando launches his first OMEN to Earth during Morgana's Eternal Night, he forces the entire planet of Akiridion-5 to watch as it nearly murders Aja after its programming corrupts the Mothership. However, Krel is able to temporarily shut it down so he and she can make a speech to Akiridion-5 to never give up the fight for their freedom against Morando, and after that, Aja destroys thee OMEN, prompting Morando to visit Earth so he can kill the Royals himself.

Following the events of Part 1, Morando creates far more OMENs to join the Taylon Phalanx so they could oppress the Akiridions even further and lead an invasion on Earth, which Loth Saborian warns Aja and Krel about. Morando then decides to lead the Taylon Phalanx in an invasion on Earth, so Krel develops a game that is linked to Parking Drones. Although the game goes more viral and many of the people in Arcadia play it, they then decide to play Go Go Sushi 2: Wasabi's Revenge instead because it was just released, giving Morando the advantage as the Parking Drones are destroyed. However, Eli Pepperjack uses the last Parking Drone to neutralize Morando's main vessel even though it gets destroyed, thus forcing him and the Taylon Phalanx to retreat. After learning about the existence of Gaylen's Core, Morando leaves his soldiers back in Akiridion-5 while he goes to Earth with his OMENs. However, it is due to this that the planet's Resistance is able to fight back against the soldiers, and Zadra leads a revolution to end them for good.

Meanwhile, Morando arrives on Earth with his OMENs, and he meets Colonel Kubritz in person. Being easily manipulated by the evil general, Kubritz helps him in his search for Gaylen's Core so he could become a god. Because of her, Morando discovers Gaylen's Core in Trollmarket and merges with it, while Kubritz leads the OMENs in a terrorist attack on Arcadia-Oaks. However, the OMENs are destroyed when the citizens of the town revolt against her along with Aja and Krel and their allies. Thus, the Taylon Phalanx were finally defeated. 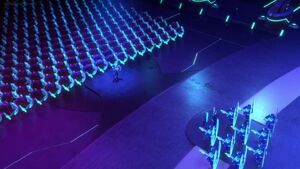 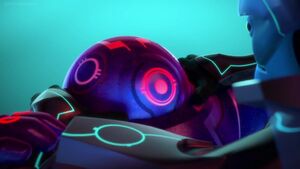 A soldier begging for mercy before Morando kills him. 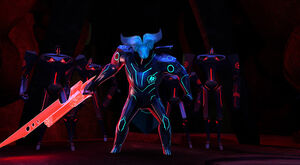 Morando and his OMENs in Trollmarket during their search for Gaylen's Core.