Undisputed Champion of the World

Taylor "The Twister" Milos is the main antagonist of the 2010 martial arts film Ip Man 2. He is an extremely arrogant and racist British boxing champion who proves more of a match for protagonist Master Ip Man.

He was portrayed by the late martial artist, Darren Shahlavi, who also played Kano in Mortal Kombat: Legacy.

Taylor is first seen during the preparations of the boxing match. He showcases his bigotry and arrogance by first rudely dismissing Hung who is greeting him, then yelling racist insults at Master Hung and Fatso.

He later appears at the boxing match where a Chinese boxing exhibition by Hung's disciples was shown to the audience.

Unimpressed, Taylor goes to the ring and challenges one of the Chinese boxers to hit him. When one does so, he easily dodges the punch and proceeds to beat down every one of the Chinese boxers, starting a riot. He also tries to take down Ip Man but is unsuccessful as Ip easily blocks his punches. As Hung and Ip calms everyone down, Taylor tries to attack again but was held back. Hung demands an apology from Taylor but he refuses to do so, instead challenging Hung to beat him in a fight if he wants an apology from him. Wanting to defend the honor of Chinese culture and martial arts, Hung accepts the challenge.

The fight is at first even, with Hung landing several punches but things go down when Taylor sucker punches Hung, disorienting him. Hung then starts to have problems with his asthma which serves as a big con in the fight. Taylor easily beats up Hung but despite Master Ip's pleading, Hung refuses to give up, not wanting to allow Taylor to insult his culture and people. Hung is then beaten to death by Taylor in the ring. As every Chinese man run into the ring to help Hung, Taylor is proud at his victory, cheering and gloating.

Later, during a press conference, he again arrogantly claims that he could beat any Chinese man that challenges him. He then insults the Chinese culture but before he could continue, Master Ip interrupts him and challenges him to a fight to which Taylor proudly responds: "You're making a big mistake".

The fight starts even with both men landing blows on each other. Taylor manages to knock down Ip Man but was himself knocked down moments later. Later, he cheats by giving Ip an illegal punch. His manager talks to the judge to prevent Ip Man from using kicks during the fight. In the next round, he starts to throw sucker punches to disorient Ip. Taylor then manages to knock down Ip again but Ip goes back up, inspired by Hung. The fight starts again with Ip landing devastating punches on Taylor's arms, weakening them. He then hits him in his eye and ear, making him disoriented, following it up with Ip twisting him around to make his mouth guard fall out of his mouth. He then defeats Twister by putting his face between his knees and jabs his face mercilessly. Taylor tries to block Ip's punches but fails and just lies there as Ip punches his face numerous times, breaking his nose. As Taylor lies defeated, the judges and the Chinese start counting to ten while the British tell him to get back up but Taylor is too injured to stand up and loses the fight. Twister watches as Ip gives his speech, clearly embarrassed and disappointed at himself. 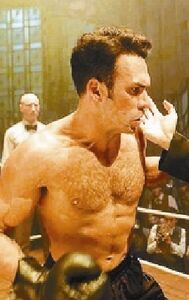 Retrieved from "https://villains.fandom.com/wiki/Taylor_Milos?oldid=4036893"
Community content is available under CC-BY-SA unless otherwise noted.