Teacher Creature (Kyoushii in Japanese) is a major antagonist in the Kirby: Right Back at Ya! episode "eNeMeE Elementary". He is the second monster in the long line education-themed monsters created at Nightmare Enterprises.

Posing a simple hat, Teacher Creature turns anyone who wears it into an evil, violent, and argumentative teacher. The teachers conduct quite dangerously under the hat's influence. Even Tiff was made into an evil teacher when she tried on the hat. After Tuff knocked the hat off of her head, the hat transformed into Teacher Creature's true form, a strict hat-shaped monster. In his true form, he jumps on enemies and hits them around with his golf baton to attack. He can also attack by quickly throwing chalk, erasers, and other school supplies. Teacher Creature gave quite a pounding to Kirby and was immune to his inhalation, but the tides turned when Tiff pointed out that the chalks could be sucked up for the Fighter ability, and she was right. Kirby then easily clobbered the mean teacher, obliterating him with a Rising Break and taking out the whole school with him.

Teacher Creature first appears as a top hat which resembles a graduation cap. His hat has black and green colorings within a zigzag pattern on its top. In his true form, his body resembles an upside down version of his hat form. He wears a long flowing green robe with a black zigzag trim on the bottom and a large square fabric base. The robe's arms have yellow linings, and he has flappy black hands. He also holds a baton which he uses to whip his students. He wears a red hat with black linings with a flat black ponytail held out by a yellow braid. He also has a red talisman with yellow linings and yellow writing on it. 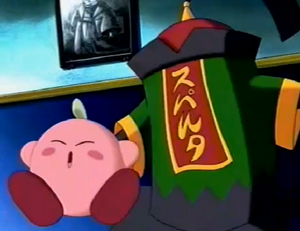 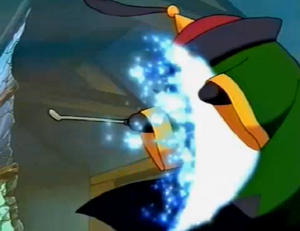 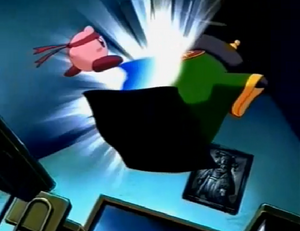 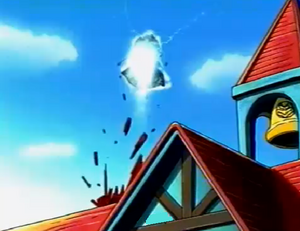 Teacher Creature's death.
Add a photo to this gallery

Retrieved from "https://villains.fandom.com/wiki/Teacher_Creature?oldid=2998947"
Community content is available under CC-BY-SA unless otherwise noted.