Awaken Kyogre and expand the sea
(both failed)

Team Aqua (in Japanese: アクア団 Aqua-dan, literally Aqua Gang) is one of the villainous groups from Pokémon Ruby/Pokémon Sapphire/Pokémon Emerald as well as their respective remakes Pokémon Omega Ruby and Pokémon Alpha Sapphire. 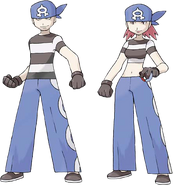