Control of the Ultimate Weapon

Omnicidal Terrorists
Team Flare (in Japanese: フレア団 Flare-dan, literally Flare Gang) is the villainous team of the Kalos region, making their debut in the video games Pokémon X and Pokémon Y. Their goals involve making money and aiming for a more "beautiful world" by using the Ultimate Weapon to wipe out all life.

Team Flare appears in X and Y. Their goal is to produce money, while also aiming for a "beautiful and better" world. They are first encountered in Glittering Cave where they attempt to steal the fossils of the researcher who resides there. They are stopped by the player. Once defeated they are in next scene in Route 10, examining the mysterious rock formation. The player is spotted by one grunt who wants revenge for ruining their plans in Glittering Cave. Once defeated they are next spotted in Geosenge Town, Where they are examining the rock formations there. In Route 13, they are found ciphering electricity from the power plant and blocking the entrance to Lumiose City as well as causing a black-out across the city, preventing the player from accessing the fifth gym. They are eventually stopped once more by the player. They do not appear again until the player has received their seventh badge from the Anistar City gym where Team Flare's leader Lysandre sends out a live broadcast to all trainers via the holo caster, telling them that Team Flare plans on wiping out all life on the earth by using the "ultimate weapon". A machine built by the king of Kalos, 3,000 years ago that exterminated all life in Kalos for a many years and using the legendary Pokémon of Kalos to activate it by going to Lysandre Labs in Lumiose City, where the player watches as the weapon emerges from the ground of Geosenge Town. Lysandre is eventually forced to cease operation once the player defeats him and is chosen by the legendary Pokemon to save Kalos. Lysandre using what remains of the legendary Pokemons Power in the machine to destroy it and crush himself as well. After Lysandre is buried under rubbed due to firing the ultimate weapon, Team Flare disbands.

Malva debuted in-person in Mega Evolution Special IV, battling Alain and Charizard with her Mega Houndoom. The battle eventually ended in Alain's victory. Team Flare, as a collective entity, debuted in From A to Z!, with the Team Flare Grunts and the five Scientists all making appearances.

They reappeared in Meeting at Terminus Cave! when several Team Flare grunts and scientists tried to steal Zygarde from Bonnie in the Terminus Cave. Altough their attempt failed, Zygarde was separated from Ash and co. in the aftermath.

In A Meeting of Two Journeys!, Xerosic and two Team Flare Admins conducted a test of a prototype weapon powered using Zygarde and the Mega Evolution energy.

They infiltrated Prism Tower in Kalos League Passion with a Certain Flare!, and executed their scheme after the conclusion of the Lumiose Conference in XY131, using Zygarde to slowly destroy the Kalos Region, starting with Lumiose City. Starting from XY132, Ash and his friends try to stop Team Flare, with Ash himself getting captured so that Lysandre could closely observe the Bond Phenomenon between Ash and Greninja. During the next episode, Ash broke free, and Alain, shocked by the results of his actions, defected from the team, with the duo facing Lysandre. Meanwhile, Xerosic successfully captured Squishy, while Clemont and Clembot were able to infiltrate the Lumiose Gym, capturing Aliana and Bryony in the process. During the events of XY135, Lysandre was defeated by Ash, Malva, and Alain and seemingly committed suicide, while Celosia and Mable were defeated and imprisoned by Team Rocket. Lysandre Labs was then destroyed when the Megalith transformed into a giant copy of Zygarde. During XY136, Lysandre was revealed to have survived and used the Megalith Zygarde to move to ANistar city SUndial, It is also revealed that once The megalith and the Sundial is COntacted, All life will be wiped out then he uses the Megalith to Kill Ash, Alain, Malva, Steven, Professor Sycamore, Diantha, and all of Kalos' Gym Leaders. Eventually, the Megalith Zygarde was destroyed when Squishy and Z2 transformed into a complete Zygarde and attacked it with Core Enforcer. Lysandre was engulfed by the attack and seemingly died as well. Afterwards, Malva promised to hunt down the other Team Flare members and afterwards turn herself in as well.

Unlike the games, where Team Flare hunts down Xerneas or Yveltal, Zygarde is their main target in the anime. Instead of stealing Poké Balls or electricity to further their plans, they utilize energy collected from Pokémon undergoing Mega Evolution.

Team Flare appear as the main antagonists of the X & Y chapter. The four Scientists first appear seeking to steal X's Mega Ring with various schemes, but are thwarted several times. Lysandre also made an appearance with Professor Sycamore, acquiring a video file of Xerneas and Yveltal for his research. 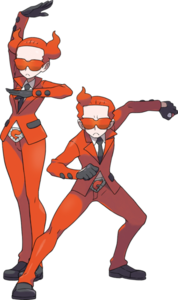 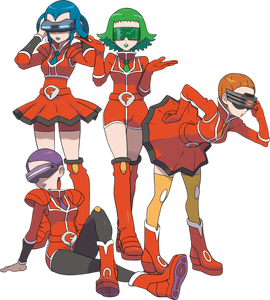 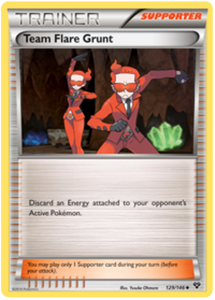