Kill everyone on the opposite team.

They Are Evil Creations Made by people of the community often seen on Youtube videos or just made for the mod its self.

One Player is chosen to be the boss once per round. The Bosses vary server to server. The Bosses Have many types of abilities such as Uber Stun And Weapons. The Bosses Can Super Jump by holding right click and loop up in the air. They Can oneshot any class expect soldiers and heavy's and demos with the eyelander passed 4 heads. Some Bosses can teleport. by doing the same thing as superjumping.

Many Bosses Use the superjump to get to players that might be in hard to reach places. If Players are camping with sentry's The Boss can rage and active a effect that stuns the players and sentry guns.

The CEO of MANN CO and a antagonist in Team Fortress 2 in Freak Fortress 2 Saxton Hale is a default boss with the normal stun and superjump.

The HHH is the smaller version of the Headless Horseman also known as Silas Mann. In Freak Fortress 2 HHH has teleportation and has his signature weapon The HHH headtaker this weapon has long reach.

A Demo wearing the Treasure Hat and has a frying pan and wanting to trade a scout shako for 2 ref. in Freak Fortress 2 He has a charging ability and a semi blind rage. 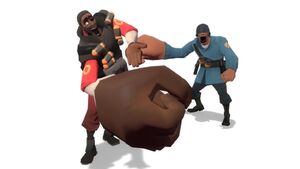 The Hud for Hale

Hale Hud 2
Add a photo to this gallery

TF2 - The Christian Brutal Sniper Theme Song
Add a photo to this gallery
Retrieved from "https://villains.fandom.com/wiki/Team_Fortress_Freaks?oldid=3313249"
Community content is available under CC-BY-SA unless otherwise noted.