Their goal is to awaken Groudon, the legendary Continent Pokémon, so they can use its powers to expand the landmass, as they believe this will benefit humans and Pokémon alike. They are bitter rivals with Team Aqua, because they have opposite goals.

The team is headed by Maxie and his two immediate subordinates Tabitha and Courtney. All of their grunts dresses hooded uniforms, and they prefer to use poison/dark and fire-type Pokémons, such as Zubat, Poochyena and Numel.

Differing greatly from other villainous groups in the series such as Team Rocket and Team Galactic, Team Magma can be seen more as a group of fanatics than real criminals, as they have a seemingly more altruistic goal instead of working for their personal gain.

They are also much more organized, since their grunts follow direct orders from their superiors instead of having their own agenda like Team Rocket. 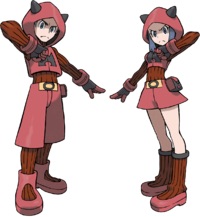 Team Magma Grunts in the remakes. 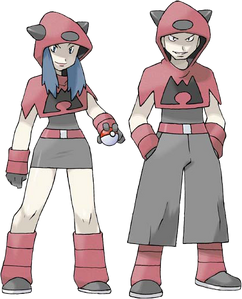