Stop the Pokémon League from forming (both failed).
Steal rare Pokémon for the Aether Foundation.

Male Team Skull Grunts have blue hair and wear a black tank top with black athletic shorts. They have black arm bands, a black bandanna, black socks, and white shoes. They also have their signature Team Skull head covering and necklace. The female grunts have a few differences including pink hair, very short white shorts, and a black leg band on their right thigh. Team Skull is mainly composed of trainers that failed their Island Challenge and developed a grudge towards other trainers that were more successful than them.

Team Skull grunts act as if they are a joke, and for the most part, they are. They walk in a goofy pose and talk in an odd way. They are usually easily defeated by the player or any other powerful trainer. Thus they dedicate their time to pick on weak trainers and those who aren't trainers at all, as well as just cause trouble in general. Despite this though, they can still be very dangerous. They have great leadership behind Guzma who leads them to do actions that can be subtle and trick the heroes into doing something that just furthers Team Skull's own goals. This causes Team Skull to have two reputations. To most competent trainers, they're a bunch of incompetent hooligans. To people of Alola and the heroes, they are a dangerous group who carry out serious crimes.

Not much is known about Team Skull's past or history. Guzma, their leader, was up for nomination to be a captain for the island challenge, but when the Kahuna didn't pick him, he went into a rage and out of envy wanted to reform Alola by abolishing it's modern traditions. He seems to model Team Skull as a whole based on this attitude. Interestingly enough though, they seem to hate any sort of competition for Pokemon battling, as they also oppose the construction of the Pokemon League. Eventually Team Skill allies themselves with The Aether Foundation, believing that they can further there own goals when allied. This is why they start to steal Pokemon, as they try to find Nebby, who Lillie ran away with from the Aether Foundation.

Throughout most of the game, Team Skull appears causing minor trouble and getting some attention in which the protagonist will show up to stop them. Their motives seem unknown for most of the game, and thus they seem to just be minor trouble makers. When the protagonist reaches Alka Island, he or she will eventually encounter Gladion who questions Hau's Ideology of doing the island challenge to have fun, accusing him of not being serious enough. When the player shows up, he demands a battle. When the protagonist beats him, two team skull grunts, wanting to back-up Gladion's retreat. Gladion stops them from doing so though, causing the two Grunts to reveal that they don't accept Gladion as a true member, the reason though is unknown. Gladion also foreshadows to seem that he has separate motives from Team Skull.

Later on the Island, The Protagonist finds Plumeria who is the only Team Skull Admin. She tells the Protagonist that she hates him or her "picking" on the rest of the grunts which to her are her little siblings. This seems to imply that she accuses the protagonist for only picking on the weak grunts rather than going for Team Skulls higher ups. This makes their group look a little hypocritical as they also don't attack the powerful trainers and instead try to pick on weak ones or just cause minor trouble instead of doing an action that progresses their goals. In Ula Ula island, Team Skull becomes much more major. After then first Trial on Ula Ula Island, Team Skull Boss Guzma is encountered. Here Team Skulls goals are revealed as they protest the Pokémon league and protest the Island Challenge. This encounter is short lived though and only bits and pieces are revealed. Later Gladion can be found. He doesn't battle The Protagonist but instead foreshadows further his differences with Team Skull, mainly telling the protagonist to protect Nebby who Lillie has. Team Skull isn't seen again until after the second Ula Ula Trial. Plumeria is at the Aether House, waiting for the protagonist, giving the same message.

Upon arrival, the Aether Foundation immediately become suspicious as they fight the heroes instead of greeting and trying to reason with them. Team Skull isn't seen until the end of the dungeon where Guzma is guarding a house like structure. Gladion runs ahead to battle Guzma but loses, but after fighting the Team Skull Grunts, The Protagonist confronts and beats Guzma, this time at full power. He or she beats Guzma though which throws him into a rage and confusion to why he can't win. The protagonist then goes to confront Lusamine, who reveals her true motives. Right when she calls an Ultra Beast Guzma comes in to surround the Heroes, in which Gladion devises a plan to stop the villains. He orders Hau to fight Guzma but the result of this battle isn't known. After the battle, no matter the result, Guzma and Lusamine escape into an Ultra Worm Hole, leaving the now evolved Nebby and Lillie behind. From here the heroes devise a plan to get into Ultra Space by summoning the legendary Pokémon. In the midst of their plan they fine Team Skull Grunts who provide a minor hiatus until Plumeria commands them to stop and reveals her true motives for helping Team Skull and talks a bit about Guzma's past.

After this, the protagonist and Lillie retrieve the Sun and Moon flutes and go the Shrine on top of the Poni Mountains. They play the flutes and it causes Nebby to Evolve to either Solgaleo or Lunala depending on the game version. They go into Ultra space to find Guzma completely done with Lusamine now that he finds out her twisted goals of just wanting to be with Nihiligo, of course this is only due to her being controlled by Nihiligo's Poisons. When Nihiligo is defeated, the Heroes, Lusamine, and Guzma escape. Guzma isn't seen again until the end of the game.

Guzma is seen in the post game at the motel near Melemele Island where he challenges the protagonist one last time. When he or she beats Guzma, he goes into another rage and period of confusion until Kahuna Hala shows up and persuades Guzma to let him train him properly. It's not known what happens to Guzma after this point in time 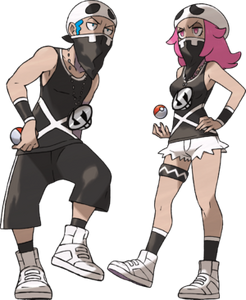