Rape and kill as many woman as he collect (succeded)
Escape the court and prison (briefly succeeded several times; but ultimately failed).

Theodore Robert "Ted" Bundy is the titular protagonist villain of the 2019 bio-pic film Extremely Wicked, Shockingly Evil and Vile - itself based on Bundy's former girlfriend Elizabeth "Liz" Kloepfer's memoir, The Phantom Prince: My Life with Ted Bundy. The movie circuits around the trial and personal life of Ted Bundy. Some scenes and quotes from the movie are identical to the clips taken of Ted Bundy's trial.

He was portrayed by Zac Efron, who also played Teddy Sanders in Neighbors.

Ted Bundy is a law student who first meets Liz Kloepfer in the year 1969 in Seattle at a bar. They go to her house and she is immediately touched by the fact that he takes no issue with her being a single mother. The next day, after spending the night, he makes breakfast for her and her infant daughter, Molly, winning them both over in the process.

However, unbeknownst to Liz, Ted is a serial killer, rapist, and necrophile who has already kidnapped and murdered several young women. In 1974, the police release a sketch of the unidentified killer, which Liz is horrified to find resembled Ted. She reluctantly calls the police, who start a file on Ted. Eventually, Ted is pulled over for running a stop sign, and arrested after the police officer finds burglary tools in his car. Ted is later picked out of a police lineup by one of his victims who had escaped, Carol DaRonch, and is charged with kidnapping. However, Ted is released on bail and goes back to Liz, who believes him when he says that the arrest was a simple misunderstanding.

During his four day bench trial, Ted and Liz meet one of Ted's old friends, Carole Ann Boone, at an animal shelter where they attempt to get a dog - which, tellingly, takes an instinctive dislike to Ted. On the last day of the trial, Ted is found guilty of aggravated kidnapping and is sentenced to serve a minimum of one to a maximum of 15 years in Utah State Prison. During his stay in 1976, Ted makes the mistake of denying ever being in Colorado to a homicide detective-learning later from his first lawyer, John, that said detective had his gas slips from Colorado and learned that Ted was lying when he confronted him about it-thus being bale to connect Ted to other murders having taken place there. John is unable to help Ted due to not being licensed in Colorado, but is able to provide him with a public defender. Ted is later charged with the murder of Caryn Campbell, and is transferred to a prison in Aspen, Colorado one year later.

Before Ted's trial, he calls Liz several times, asking her to visit him, but she refuses. He is ultimately found guilty, and faces the death penalty. During his time in jail, he practices for when he will jump out the window of the office for his escape by jumping off the top bunk in his cell. After a recess during trial, Bundy makes his escape out the office window. He is recaptured six days later and is eventually visited by Liz in prison during Christmas season. She tells him she wants to end their relationship and leaves, but not before giving him a drawing by Molly. At some point during his jail time, Ted escapes again through the ceiling in his cell by saw a square in it.

He arrives in Florida two weeks later and murders two women at a sorority house, and the next day rapes and murders a 12-year-old girl. Ted is pulled over by a police officer, whom he manages to fight off by punching him in the stomach. However he is quickly recaptured afterwards. He tries to call Liz again, but she hangs up on him. Ted is later visited by the sheriff in his cell, who rips Molly's drawing in front of him and has two guards hold Ted against his will so they can take picture of his teeth (due to how often he bit into his victims).

Ted is later visited in prison by Carole, who has moved to Florida to get closer to him. Once he is confronted by his new lawyer, he tells Ted that the court will agree to a 75 life sentence instead of the death penalty if he pleads guilty for killing the two sorority girls-but Ted angrily refuses. Carole offers to help get Ted's story heard.

In 1979, it is revealed during Ted's days in court that he has a large following of women who are attracted to him. He continues to try to call Liz, but her new boyfriend, Jerry Thompson, unplugs the phone while she was asleep. Due to his displeasure with his lawyer, Ted begins acting as his own attorney in court. Ted is angry to discover that Carole called his mother over once she visits him in his cell. In court, when Ted's opportunity to plead guilty and face a life sentence surfaces, he instead refuses to do so while insulting his lawyer, much to his dismay-causing him to quit immediately after. This prompts Ted to take over as lead counsel. He tries sending letters to Liz, as well as calling her once more, but her new boyfriend Jerry continues to get in the way, insisting that Ted is "killing her".

As Ted and Carol have sex in the prison, it is implied he intends to use her to replace Liz, talking about the life they will have together once he is free. After using her as a witness in court, he proposes to her on the spot-thus making her his wife considering a public declaration properly phrased in an open court room in the presence of court officers constitutes a valid marriage. Carole later reveals that she is pregnant. As Ted's attempts at acting as his own lawyer fail, he is sentenced to death by the electric chair.

Ten years later, the day before Ted is set to be executed, Liz visits him on death row after receiving a letter from him. She demands that he tell her the truth about himself, as well as admitting that she was the one who had him turned in in the first place. He admits that he plans to confess to the murders but only in an attempt to save himself-denying ever being capable of the crimes they accuse him of. She then shows Ted a picture given to her by a detective of one of his decapitated victims-asking what he did to her. He hangs up the phone, but breaths on the glass between them and writes in the condensation, "HACK SAW", finally setting her free of all the anxiety and emotional abuse he put her through. He erases the word on the glass before one of the detectives confronts him. Ted confesses to having murdered 30 women (though the actual number is suspected to be higher) and is executed. His last request before he died was that his ashes be scattered in the Cascade Mountains where he deposited the remains of his victims' bodies. Carol Ann gave birth to his child during his sentence.

Ted Bundy was a psychopath who hated women, and who took sadistic pleasure in raping, torturing, and killing them. He was charming and charismatic enough to lure women into "helping" him only so he could kill them in the most brutal way possible. Even his "love" for Liz is questionable, given he was uncaring of any of the psychological effects his actions had on her, and was quick to replace her with Carol when he no longer had someone to help him with his case. It is even implied that he secretly wanted to kill Liz but had to resist the urge; it can be up for debate as to whether or not he would have killed her had he not been arrested.

Ted kills one of his victims. 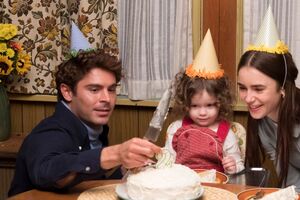 Ted with Liz and Molly. 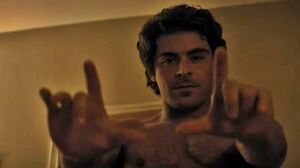 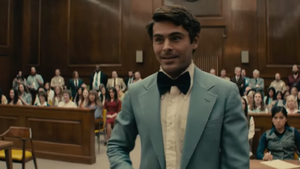 Ted acting as his own lawyer.
Add a photo to this gallery

Retrieved from "https://villains.fandom.com/wiki/Ted_Bundy_(Extremely_Wicked,_Shockingly_Evil_and_Vile)?oldid=3927086"
Community content is available under CC-BY-SA unless otherwise noted.