Being with Marjorie (formerly)

Kill and eat as many people as he can (succeeded, then failed)

Kill his sister Janet for finding out about his "secret" (failed)

Ted Harrison is the villainous protagonist of the 1996 horror movie Bad Moon.

He is portrayed by Michael Paré.

During their expedition in Nepal photo-journalists, Ted and his girlfriend, Marjorie, are having sex when a werewolf attacks their camp. The werewolf bites Ted and kills Marjorie while a wounded Ted grabs a rifle and blows the werewolf's head off as a result, killing it.

With the intent of living in isolation Ted moves back home into a trailer in the woods hours away from his lawyer sister Janet Harrison. One day in an effort to reach out to her and his young nephew Brett, Ted calls them up and invites them for a meal at his home by the lake. Upon seeing him again the family dog Thor, begins to sense something wrong with "Uncle Ted" and goes into the woods tracking a smell which leads him to human remains hanging on a tree branch.

Meanwhile having heard of Marjorie's death and in attempt at comforting her brother Janet invites him to stay with them. Shaken and fearful of hurting them Ted declines and Janet Brett and Thor leave before the sun starts to set, at Ted's insistence. The next day there is an investigation going on in the woods near Ted's trailer where the mangled bodies of several missing hikers and a Forest Ranger were found, Ted under fear of being found guilty, calls Janet and tells her he's changed his mind. He parks his trailer in her yard in the hopes that being near his family he'll be able to control himself. Thor however, aware of Ted's nature and suspicious of him becomes hostile towards him. Noticing that he goes out to "jog" at night with handcuffs Thor becomes frenzied until Janet lets him out of the house.

Tracking his scent Thor follows Ted into the woods and finds him turned into a werewolf and tied to a tree growling, clawing and trying to escape, meanwhile Janet begins looking for Thor and goes into the woods. Aware of her danger Thor manages to find her and distracts her back to her house before she finds Ted. The next day while making breakfast Janet sees on TV the news coverage on the killings and confronts her brother about not telling her his reasons for visiting her and invites him to stay permanently.

While Brett is watching Werewolf of London (mistakenly confused for The Wolf Man) Brett and Ted discuss werewolves and their existence with Ted stating that it doesn't take a full moon to start the transformation and saying that he has "been acquainted with a few in his time" and Brett stating that werewolves don’t exist. While Brett throws out the trash Ted tries to warn his sister and advises her to start listening to Thor and his sudden change in behavior and drops hints that the murders had been done by a wolf.

She ignores his pleas and he retreats into his trailer where Thor follows him waiting for him until the sun starts to set. Ted scared hides from the dog at first but eventually leaves the trailer with the hopes of chaining himself again. With the sun setting Ted screams for Janet to take Thor away and when she does he rushes into the woods. Thor afraid of Ted hurting his family begins to bark until Brett lets him out of the house. He makes his way to the woods to find that Ted was too late and wasn't able to handcuff himself and has made his way into the backyard. Werewolf Ted attacks Thor but the dog fights back which wake up Janet and Ted is scared away when she turns on the bright deck lights. Janet sees Thor's injuries and fearful of Ted's advice calls The Sheriff and goes into Ted's trailer to notify him thinking he's there.

She does not find Ted but instead finds his werewolf book, gruesome pictures of Marjorie's body and some of Ted's victims and a journal in which Ted details his pain and his turmoil with not finding a cure for his "disease" and his hopes of finding peace by his family's side. Werewolf Ted seems to lurk outside the trailer but Janet leaves safely, shaken but adamant about straightening things out with her brother. Later that night a flopsy who had previously tried to frame Thor for a false bite, goes into the Harrison's yard with intent of killing Thor but is instead attacked and killed by werewolf Ted. The next day the sheriff shows up and questions Janet about Thor and informs her of the flopsy's attack by a wild animal having found his mutilated body 100 yards away from her property. Remembering Thor's injuries Janet asks if the culprit could have been a wolf but the sheriff says no and advises her to turn Thor into the pound.

Not believing Thor could be the killer she confronts Ted who initiates Thor to attack him with his glare and Thor is taken to the pound. Now more confident and apparently more accepting of his bloodlust Ted "marks his territory" by urinating in Thor's doghouse (as Thor had done to his trailer earlier) and shows hostility towards Brett who is angry at Ted for being the reason Thor was turned in. Brett pretends to go to sleep but packs his backpack and sneaks out of the house to free his dog while Janet confronts Ted in the woods with a hand gun and 8 rounds.

In the woods, Ted accuses his sister of not listening to his warnings and knowing the truth all along and slowly begins to transform. Janet flees back to the house in panic while Brett breaks into the pound and frees Thor, who goes back to the house to find and stop Ted, with Brett following right behind him. Meanwhile, Janet arrives in the house, grabs a pistol and loads it up with bullets and flees into Brett's room and closes the door, but werewolf Ted breaks in and is about to kill his sister, when Thor finally arrives and a brutal fight erupts between the two.

Thor had a bit of an advantage, but werewolf Ted managed to slash Thor and throw him against the ceiling, smashing the light bulb in the process and turning out the light. Brett arrives but werewolf Ted strangles him, but Janet aims the pistol at him and screams "get the fuck off my son!" and fires all rounds on Ted until she runs out. Wounded, but still alive, werewolf Ted growls at them, but Thor who is seemingly not dead, recovers all his strength and hurls himself at werewolf Ted and they both fall out of the window. Werewolf Ted then flees into the woods with Thor on his trail.

At dawn, Thor finally finds a-now-human Ted, all bloodied and wounded. Ted tells Thor to "do it" and Thor lunges at Ted and finishes him off, killing him.

A bloodied Ted after being shot multiple times by his sister Janet. 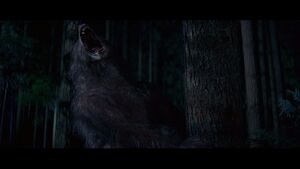 Ted roaring in a fit of feral rage as he tries to free himself after handcuffing himself to a tree before transforming. 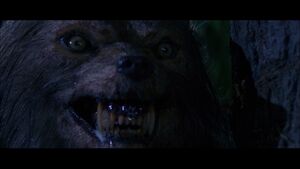 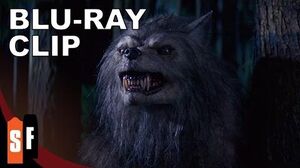 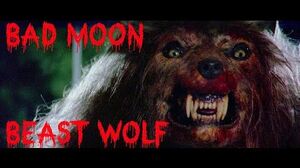 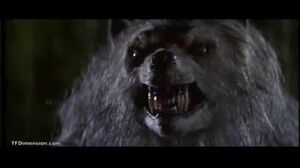 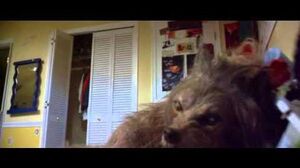