Jingle All the Way

Annoying Howard Langston and showing him up.

Seduce Liz and steal her from Howard Langston (failed).

Theodore "Ted" Maltin is the secondary antagonist in the 1996 Christmas comedy film Jingle All the Way.

He is Howard Langston's annoying next door neighbor, a divorced father who seems to be perfect in every way and enjoyed showing Howard up. Most people view him as a model father and single women adore him. He seems nice to Howard's wife Liz, but his real goes is wooing her away from Howard as he viewed her as being too good for Howard as Howard was always being late for things and breaking promises.

He was portrayed by the late Phil Hartman, who also played Lyle Lanley in one episode of The Simpsons, Tom Morgan in The Pagemaster, and Major Colin Thorne in Sgt. Bilko and Randy on 3rd Rock From The Sun.

It's unknown how long Ted has been the Langstons' neighbor, but he reveals that months ago he met Liz at her Labour Day barbecue, which assumes that he moved to their neighborhood after he divorced his wife or his wife left him before the Langstons moved in.

Ted first appears in the film, watching his son Johnny in the annual martial arts contest, along with Liz Langston, the wife of Howard who is watching her son Jamie. Howard, meanwhile, who left to leave for the martial arts contest at the last minute, was pulled over by the police for speeding on the highway and driving on the shoulder. The cop, not impressed by his behavior about being a hurry and complaining about having to miss his son's karate class, made his do several sobriety tests, including reciting the alphabet backwards. By the time he arrives to the building where the contest was being held, all that remains is a janitor cleaning the floor.

Ted is then seen on the roof of his neighbor's house, putting various festive decorations up seeing as Howard didn't put up any himself, and tells Howard that he has recorded the contest via camcorder, which results in him giving his neighbor a dirty look when his back was turned.

Ted gets Johnny a reindeer as a Christmas surprise that seems to dislike Howard as he leaves to get a last-minute Christmas present called a Turbo Man for Jamie, he then gives Howard advice about wrapping chains around his car tires to which Howard mutters: "Maybe I should wrap some chains around you!" Later he comes to the Langstons' house with Johnny to help out. He sees Liz making the cookies and tells her to take a shower while he finishes the cookies and watches the boys, even undoing her apron in a seductive way.

Howard phones back home and is surprised to hear Ted on the other end, to make matters worse he is tasting the family cookies and makes comments of how great they are while making orgasm sounds, to which Howard angrily shouts: "PUT THAT COOKIE DOWN! NOW!"

He then invites his neighbors to see the reindeer and take pictures with Johnny naming the reindeer after his dad while giving them hot chocolate. Later he is putting Howard's star on his tree, but Howard sees him the moment he gets back which makes him even angrier. He remembers Ted telling him that he got a Turbo Man for Johnny that was nestled safely under their tree and decides to teach him a lesson.

Meanwhile Liz tells Ted that putting the star on the tree has always been Howard's job and he's adamant about it. Ted then responds: "Too bad he's not as adamant about spending time with his family on Christmas Eve."

While he and Liz are outside listening to the carol singers, Howard breaks into Ted's house to steal the toy, but then has a change of heart when he reads the gift tag, realizing that he is stealing from a child and decides to put it back, but he runs afoul of Ted's reindeer and accidentally burns one of the three kings that are displayed in Ted's living room.

The burning head goes through the window and then he and Liz see Howard in the house, they immediately enter and find him still holding the Turbo Man doll. Howard tries to explain to Liz what happened, but Liz refuses to listen and decides to go to the winter entertainment parade without him asking Ted to drive her and Jamie there. Ted agrees and before he walks out, he gives Howard a triumphant but angry glare saying: "You can't bench press your way out of this one."

After dropping off Johnny and Jamie at the parade, Ted drives with Liz to park the car and reveals his true feelings for her. He attempts to seduce her saying that she deserves better. He is unaware that Howard has seen what he's doing and is angrier than ever. Unfortunately, as he ran towards Ted's car, he bumped into Police Officer Hummel who had given him the speeding ticket and spilled hot coffee on him resulting in him being chased. Ted then attempts to kiss Liz, but she responds by hitting him with a flask of eggnog and storming off which results in him being disappointed as well as having a wet face and broken glasses.

He was then seen in the ending moments of the movie, still covered a little in eggnog, Johnny told him that Howard was dressed as Turbo Man. Now afraid of Howard (assuming he knows what he did to Liz), Ted immediately flees, dragging Johnny with him with his son saying: "Dad, you smell like barf." It's possible that Liz told someone else about what Ted tried to do to her and the word spread, resulting in the neighbors turning against Ted for trying to seduce a married woman and appreciating Howard in his place. 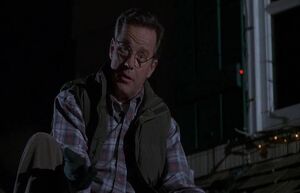 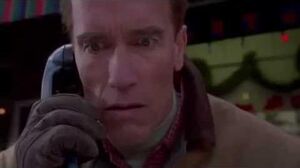 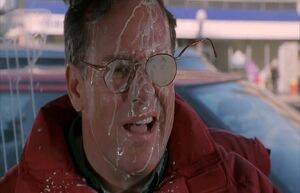 Ted, after just being rejected by Liz.