It's currently unknown as to who voiced him.

Teddy Benavidez is the twenty-eight year old Dominican drug dealer who resides in Galveston Ave, Northwood, Liberty City. He is an associate of the Pegorino Family, ran by Jimmy Pegorino, who offer him protection. By 2008, however, the relations between the two gangs are deteriorating. Benavidez had been friends with Pegorino Family capo Ray Boccino, until he stopped paying back the money he owes Ray. Ray hires Niko Bellic to kill Benavidez.

A Long Way to Fall

Niko travels to Teddy's last known whereabouts in Northwood where he interrogates (and has a choice of killing) Alonzo. If Niko lets Alonzo live, Alonzo calls Teddy after Niko heads into the building to warn him and the rest of the gang that Niko is coming for him so they can ambush Niko.

After Niko shoots through Teddy's gang, he corners Teddy against the building's edge. Niko can shoot Teddy or just approach him, as either will make him fall through some loose bricks on the edge and to his death in the garden below. 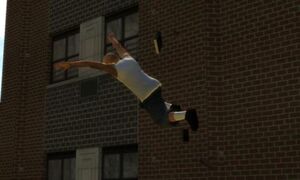 Teddy falls to his death
Add a photo to this gallery

Retrieved from "https://villains.fandom.com/wiki/Teddy_Benavidez?oldid=4055422"
Community content is available under CC-BY-SA unless otherwise noted.