Drinking with his companions.

Obtain Matty Demaret's father's inheritance money to attain a wealthy fortune and escape with it (failed).

Kill Matty (failed) along with his gang (partially succeeded).

Teddy Deserve is the main antagonist of the 2001 movie Knockaround Guys.

He was portrayed by John Malkovich, who also portrayed Mitch Leary in In the Line of Fire, Cyrus Grissom in Con Air, Quentin Turnbull in Jonah Hex, Vicomte Sébastien de Valmont in Dangerous Liaisons, Teddy KGB in Rounders, Tom Ripley in Ripley's Game, Humma Kavula in The Hitchhiker's Guide to the Galaxy, Pascal Sauvage in Johnny English, Galbatorix in Eragon, and Dave in Penguins of Madagascar.

Teddy is the right-hand man to Benny Demaret. He aids Matty Demaret, Benny's son, to finally give him a job, which is to collect a bag with a lot of money for Benny, because there been strange shortages in their money recently.

On the way back with the cash, Marbles stops in a small Montana town to refuel his personal plane. He has been instructed to guard the bag with his life so he takes the bag with him as he goes to pay for the fuel. However, Marbles sees the sheriff & his deputy and is paranoid that they may question him about the bag's contents. Marbles is also in possession of cocaine which he dumps on the runway. He drops the bag amongst a pile of luggage waiting to be loaded onto another flight, and despite telling the cashier to keep the change, the other flight takes off before he can retrieve his bag. Unknown to him, the bag of money was taken by two local teenage pothead skateboarders who work as baggage handlers at the airport.

He calls Matty and tells him the news. Matty, though upset, knows that he must fix the situation quickly and quietly if he ever wants to work for his father. Matty, Chris, and their friend Taylor fly to the small town of Wibaux, Montana to help Marbles search for the missing money.

While in town, Matty and the other guys attract the attention of two local law-enforcement officers, who find out about the money and want to keep it for themselves. The mob guys then try to negotiate with the officers to get the money back but are turned away. Matty calls Teddy and Teddy arrives in Wibaux with two other mob henchmen. Chris decides to leave for home and disappears. Marbles hangs around in a bar with the two mob henchmen who secretly hate him, while Taylor and Matty wait in their hotel for word from the Sheriff. After taking him outside in a friendly manner, the two mob men throw Marbles to the ground and ask about the whereabouts of the other three. Marbles tells them he doesn't know and the two shoot him several times and throw his body in a trunk.

Later that night, a deal is arranged for the Sheriff and Deputy to meet Matty and Taylor in a warehouse. When they arrive, the lawmen are planning to kill Matty and the others and keep the money, but Teddy and the two mob men show up when Matty and Taylor do and the entire thing turns into a Mexican standoff. Chris arrives and shoots the Sheriff's cousin who came to help the Sheriff, and Matty and Taylor inquire about Marbles. Chris says that he thought he was with them. Teddy gives a signal to the two henchmen and they all fire on Chris who is killed. The Sheriff and Deputy, in the chaos, shoot the two mob men. Taylor then kills both of the lawmen but is shot in the arm by Teddy. Teddy's gun is out and Matty holds him at gunpoint. Matty says that it is Teddy that has been stealing and causing shortages from his father all along. Teddy tries to reload and shoot Matty claiming that Matty doesn't have the guts to shoot him, but Matty kills Teddy. 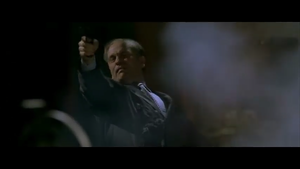 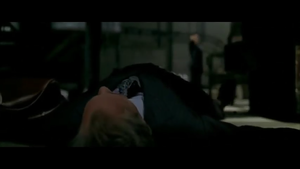