Teedo is a minor villain from the Star Wars universe. He first appeared in Star Wars: Episode VII - The Force Awakens as a minor character, then later appeared as the main antagonist in the Forces of Destiny episode, "BB-8 Bandits".

He was voiced by David Acord and portrayed by stuntman Kiran Shah, who also played Blunder in Legend and Ginarrbrik in The Lion, the Witch and the Wardrobe.

Teedo is a humanoid alien of the Teedo species, short with pale green-grey skin. He has three fingers on each hand and two toes on each foot, and wears metal sandals and brown and grey cloth wrappings around his body to protect himself from the heat and sands of Jakku.

He wears a pair of belts across his chest containing useful scavenging items and weapons, and has a small pack on his back. He also wears a tubed metal mask with large eye areas to protect against sand and wind, and the tubes reclaim water back to his body.

Teedo is cruel and wrathful, and apparently has quite a temper. He shows no respect to anyone, and will swindle, cheat, steal, and kill to get his way. He is fierce and determined, as he goes to great lengths to get both money and revenge.

Teedo was a scavenger on Jakku, riding a luggabeast. He caught a BB-8 unit in his net and planned to sell or use it for parts, but was stopped by fellow scavenger Rey. After a brief argument between the two, Rey freed BB-8 as Teedo rode away, angry.

In the episode "BB-8 Bandits", Teedo returns, this time leading a pack of bandits. Teedo instructs the bandits to attack Rey and try to capture BB-8, but Rey outwits them and escapes on her speeder. Teedo and the other bandits board speeder bikes and chase after her, shooting and trying to stop her.

Rey manages to trick the other bandits into crashing their bikes into each other, then leads Teedo to the empty husk of an Imperial Star Destroyer. Teedo shoots her speeder, forcing Rey to stop and confront him.

Teedo pulls out a large blaster and takes aim at Rey. However, he is stopped when a junk-eating nightwatcher worm appears and devours his speeder bike, throwing him off. Teedo flees, and Rey and BB-8 make their way to the Niima outpost. 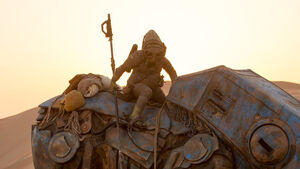 Teedo in Forces of Destiny.

Teedo on his speeder bike.