Delightful Mansion from Down The Lane

Destroy The Kids Next Door for good

The Teen Ninjas are a faction of teenagers equipped with Battle Ready Armor who serve The Delightful Children From Down The Lane and Father. The two most notable members are Cree Lincoln and Chad Dickson, both former KND operatives, who frequently lead them in their battles.

In "Operation S.L.U.M.B.E.R", a group of teens attempted to make off with the Code Module for Father being led by Cree; Chad was keeping Numbuhs 86, 3, and 12, and 4-30-teen busy and away from the Moon Base by disguising himself as Numbuh 86's mother and making her throw a slumber party. It might have worked if not for Numbuh 4's uninvited presence. The teens manage to succeed with their plan on stealing the Code Module since Numbuh 12 was almost 13 and decided to join the teens early. Due to the teens success Father was able to create the animalization forcefield to turn all KND operatives into animals until Tommy takes his booger out of the Code Module to be immune and puts The Delightful Children's and Fathers boogers into The Code Module to turn them into animals which Father surrenders to and turns the KND back to normal although that makes Father a KND operative as he becomes supreme leader in Operation I.T.

In "Operation T.R.E.A.T.Y", it is revealed that their leader is a boy named The Steve. Like most teenagers, Teen Ninjas members are fond of torturing children in general, but most of their proper operations consists of attacks on the Kids Next Door organization.

In real-life, the Teen Ninjas would be seen as a group of thugs and gang members who commit assault and battery against children. 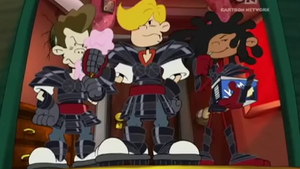 Retrieved from "https://villains.fandom.com/wiki/Teen_Ninjas?oldid=3009822"
Community content is available under CC-BY-SA unless otherwise noted.