Having sex with anything with a hole.

Get over his sex addiction (failed).

Tek Knight is a supporting antagonist in the highly controversial adult comic-book series The Boys. He a founding member of Payback. Unlike the rest of the superheroes in The Boys universe, he has no actual powers, instead using a high-tech suit to fight.

Tek Knight is one of the founding members of Payback. Prior to his association with Payback, he previously led a group known as the Maverikz (who in turn were savagely beaten by The Boys in issue #31). The current Tek Knight is actually the third person to hold the identity. Two prior incarnations of Tek Knight, originally called Steel Knight, were introduced in Issues 52 to 54, as well as prior versions of sidekick Laddio. Mallory says they revamped his "franchise" later. Issue #9 gives his name as Robert Vernon.

Tek Knight is a vastly different hero from his predecessors, which were portrayed as super strong heroes with a helm and a jet pack. Having not received a dose of Compound V, Tek Knight instead has a technologically advanced suit, with which he operates. The suit's abilities aren't fully described. Despite possessing the ability to fly, Tek Knight also makes use of several vehicles and operates out of a cave based headquarters.

Tek Knight is one of the few heroes that is shown to have a boy sidekick, named Laddio. The current Laddio is actually the third to hold the name, as the first was killed during the Battle of the Bulge and the second would go on to pursue a solo career as the hero Swingwing. Tek Knight also is shown to have an associate called the Talon, who switches back and forth between ally and adversary.

Tek Knight was one of the few heroes to never engage the Boys' attention, as he never did anything depraved or morally wrong like many other "Heroes". Butcher describes him as boring, and seemed to be a genuinely nice person, though highly homophobic. Soldier Boy states in Herogasm that he was one of the only members in Payback to be nice to him.

Tek Knight's career would end after a murder of a young gay man that was being investigated by the Boys coincided with the growth of a brain tumor "the size of a fist", which caused an overpowering desire to have sex with anything. This would cause him to dismiss Laddio; upon realizing his compulsion was causing him to consider sex with his young ward, he immediately acted to remove the temptation and avoid any chance of his acting on it. Though he was cleared of having anything to do with the murder by Butcher and company, his butler would later release details about Tek Knight's sexual compulsions, leaving him being dubbed in the press as the "Homo Hero" and would be dismissed from Payback. He would die shortly afterward, when a wheelbarrow full of bricks landed on his head while he was saving a mother and her child from being crushed by it. In his head, Tek Knight died a hero, as he hallucinated himself saving the world by having sex with a meteorite.

An autopsy revealed Tek Knight had a large tumor on his brain, explaining his bizarrely perverted behavior.

As for season 2, he does not appear in any of the episodes. He is, however, mentioned frequently. A member of the support group for people who have been gravely injured by Supes is a paraplegic girl who has been crippled by Tek Knight during an alleged rescue. Aside to all the other members of the group, she cannot tell the truth about how her spine got damaged and admits that she understands that Tek Knight saved her life but she cannot either stop being angry at him for the little delicacy he had when rescuing her. 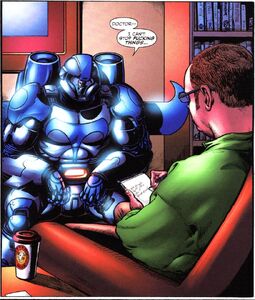 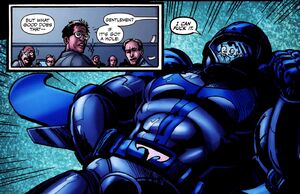 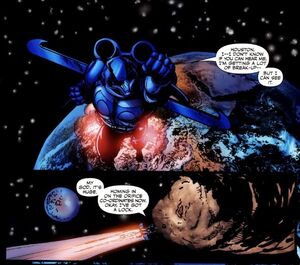 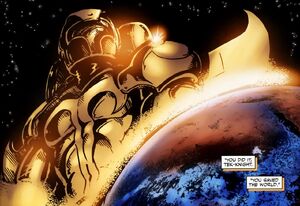