After the founding of the Cyber Initiative in the 1990s

Robotic weaponry and built in arsenals

The Tekunin are a combative clan of cybernetic Lin Kuei warriors founded by Sektor and a minor antagonistic faction in the Mortal Kombat universe.

After Sektor's defeat in his bidding for the Lin Kuei clan leadership against Sub-Zero, still convinced that the Cyber Initiative is superior to the flesh, Sektor fled to Japan in order to establish his own ninja clan that were formed in his own image. His followers became cybernetic ninja warriors, though not on a technological level as high as his own. Thus the Tekunin was created.

Sektor, for reasons unknown, was in the Temple of Argus within the Botan Jungle. He witnessed the Edenian demi-god Taven activating the altar and speak to it, presumably not hearing Argus himself. He captured Taven, brought him to his clan's warship and tortured him for info on what he learned from the altar, but Taven refused to answer. Then, Special Forces fighters, led by Sonya Blade, showed up and attacked the Tekunin Warship and its robotic ninjas, allowing Taven a chance to make a hasty escape.

Although they do make an appearance in the new timeline they are unofficially called Lin Kuei cyber ninjas instead of being called Tekunin. They were tasked to capture Sub-Zero and Smoke, bring them to Lin Kuei and convert the two ninjas into cyber ninjas. Although they succeed in capturing and converting Sub-Zero, they failed to convert Smoke due to Raiden's interference.

They pledged loyalty to Shao Kahn and his invading military, playing a role as a vanguard for Shao Kahn in his quest to take over Earthrealm. The cyber ninjas later made an unsuccessful attempt to purge Earthrealm fighters in a temple.

Cyber ninjas make their last appearance as an organization here. They were multiplying their numbers while laying low when Sub-Zero (who had been brought back from the dead) infiltrated their secret hideout. Just like the original timeline Sektor and Sub-Zero fought for the Lin Kuei leadership, with the latter emerging as the victor. Cyrax, a cyber ninja against his will and managed to regain his humanity thanks to Sub-Zero's effort, relinquished Lin Kuei leadership to Sub-Zero and blew up himself and the rest of cyber ninjas.

However, a surviving cyber ninja named Triborg appears as a DLC character. In Triborg's ladder ending The Tekunin is referenced, where he forms the organization using rebuilt cyber-ninjas stored on the data drive that created him.

The Tekunin are skilled fighters, though not able to the point they could outfight Taven despite having the advantage of numbers. They are all equipped with cybernetics similar to those of Sektor’s and have demonstrated the ability to use his teleport attack. The Tekunin have other advanced technologies at their command, as seen with their warship. They may have even more weapons at their command like the warship since Sektor stated the ship’s destruction would not stop their rise to power.

Taven being brought aboard the Tekunin Warship after he was captured by the Tekunin clan. 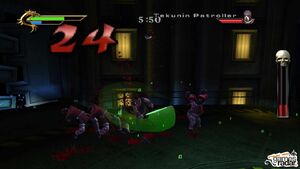 Taven fights off against cybernectic members of the Tekunin clan while escaping their Tekunin Warship that is under attack by the Special Forces. 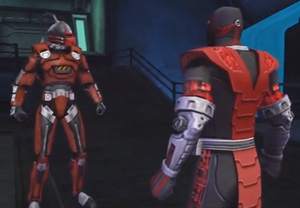 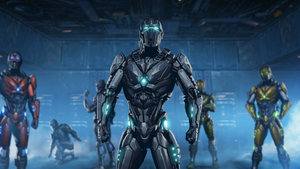