The Order of the Knights Templars

Create a perfect world order using the Pieces of Eden and destroy the Assassins.

The Order of the Knights Templar, more commonly known as the Templar Order, Knights Templar or simply the Templars, are a monastic military order that serve as the chief antagonists of the Assassin's Creed video game series. The modern-day version of the Templars operates using a front called Abstergo Industries, a super-corporation that has been responsible for the majority of human technological development for the past millennia.

The Templars seek to create a perfect world, although the means by which they aim to do so - through force, control and the destruction of free will - directly contrast the ideals of their sworn enemies, the Assassin Order.

Because of this difference in ideology, the Templars became involved in a covert war against the Assassins, spanning millenia, with their opposition's motivating belief being that mankind should always have the ability to choose; to have the freedom of liberty, even if it meant accepting that humanity would always be flawed in their ways.

The Templars seek the Piece of Eden in order to create a world where humanity has transcendent from their animalistic instincts. They believe through this they will unite the world in peace under the Templar Banner.

At times the Assassins have worked together with the Templars so as to attain a common goal, peace. Prior to the French Revolution, the French Templar's Grandmaster François de la Serre and the French Assassin's Mentor Honoré Mirabeau, struck a deal to make the two Orders work together using the elements of freedom and order so as to reach a common goal, peace for the people of France.

This was seen when Maximilien de Robespierre tried to establish a deist religion, the Cult of the Supreme Being, which was entirely based on the Templar Doctrine. During the destruction of the Templars, Jacques de Molay, cursed King Phillip and Pope Clement V that they will answer for their crimes before God almighty. Even David Brewster believed that the Pieces came from God himself.

While most Templars are evil, there are a number of Templars who are truly benevolent. Colonial Templar George Monro say himself and his fellow Templars as protectors and providers form humanity, making Shay Cormac and his fellow Templars follow his methods. Even Haytham Kenway and Prince Ahmet believed in the True Templar Ideology and viewed it as a necessary to remove the chaotic elements of humanity.

Templars also held an immense disgust for slavery that one member, Woodes Roegrs was forced out of the Order due to him practicing slavery. The Jamaican Templar Grandmaster Laureano de Torres y Ayala even stated his disgust for enslaving people, but also claimed that men of ability should rule.

Because of the Order's nature, they are highly vulnerable to corruption and fanaticism. The Borgias were well known examples of Templar Leaders who used the Order to further their own tyrannical goals. Modern Templars call the Rule of the Borgias as the Dark Age of the Order and this may have led to the creation of the Black Cross which kills off Tyrannical members of the Templar Order. However, some like Thomas Hickey work with the Order in order to earn money to live a luxurious life.

They are also Fanatics like François-Thomas Germain, a Sage and Templar Grandmaster who reverted to the radical Templar Ideology of Control, though this is most likely inspired by him being a reincarnation of Aita, an Isuan entity who holds a disgust for humanity and wishes to regain control humanity.

Originally founded as a holy order of knights during the Middle Ages (though before this, the Templars existed as a more loose, unofficial coalition) the Templars were mostly active in the Holy Land during the Crusades. However, in 1307, the King of France, Phillip IV, accursed the Order of heresy, which supposedly ended the Order.

However, the Order was not defeated; they had just been driven into hiding. They continued to operate in secret through the Hundred Years' War and into the Renaissance. During the early 1500's, they managed to gain control of Italy when Rodrigo Borgia, then the Grand Master of the Order, was elected Pope. They managed to obtain two "Pieces of Eden" and locate "The Vault". However, Rodrigo's efforts were thwarted by the Assassin Ezio Auditore. Eventually, Rodrigo was killed and his son Cesare assumed leadership of the Order. Even then, the Assassin bested Cesare's forces, and the Borgia's control over Italy eventually broke. For the rest of the 15th century the Templar Order went into decline. Not much is known of their activities until the 19th century.

By the 20th century, the Templars had established a major foothold in the American industry, with important figures such as Thomas Edison, Henry Ford and Harvey Firestone being Templars themselves. In 1937, the Templars founded Abstergo Industries, a secret company aiming to control capitalists and workers and neutralize communism. The Templars, who had previously created the capitalistic economic system, hoped to control the people through owning capitalistic companies, as opposed to having people own the companies. The company would go on to control a lot of corporations and organizations, including the Ford Motor Company, NASA, the CIA and BP. In the late 1930s, Adolf Hitler, a Templar, began to take over political control over Germany.

After having assumed full control, Hitler used an Apple of Eden to form Nazi Germany and hypnotize the population to join his cause. With this newfound support, Hitler began to declare "war" on Germany's neighboring countries, quickly conquering them. A worldwide war - World War II - soon erupted, but the entire war was a Templar plot to keep the people under the Order's control. While the entire war was overseen by the Templars, the world was split between two forces. On one side of the war stood the Axis, primarily led by Hitler and Benito Mussolini. On the other side stood the Allied forces, led by the Franklin D. Roosevelt, Winston Churchill and Joseph Stalin; the Big Three. By the time the war concluded, the Templars planned to take advantage of the resulting peace.

Members appear in other media 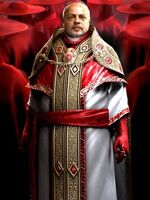 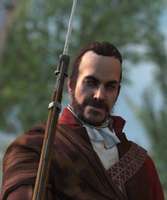 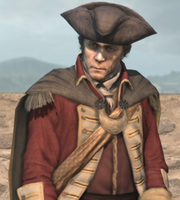 Colonial Rite of the Templar Order

Sibrand
Add a photo to this gallery
Retrieved from "https://villains.fandom.com/wiki/Templar_Order_(Assassin%E2%80%99s_Creed)?oldid=2063693"
Community content is available under CC-BY-SA unless otherwise noted.