Temutai is one of the main antagonists in the DreamWorks/Nickelodeon TV series Kung Fu Panda: Legends of Awesomeness. He is a huge water buffalo who is very strong and very skilled in the martial arts.

He was voiced by Kevin Michael Richardson, who also voiced Trigon in Teen Titans, Shredder in the 2012 Teenage Mutant Ninja Turtles show, and Joker in The Batman.

Even though Temutai's origins are unknown, his legend is well-known throughout the Valley of Peace. Temutai himself claimed in "The Princess and the Po" that he had defeated Kung Fu masters across the land. Additionally, Master Tigress mentioned that Temutai's Kung Fu was so strong that he could tear an opponent in half without even touching them. Master Mantis had commented that he thought Temutai was just a myth.

It was presumably through this legendary reputation that Temutai became king of the Qidan Clan. It's unknown how long he's had this position, but another one of Temutai's remarks in the episode indicates that he's had at least one princess as a servant. In exchange for peace, Princess Mei Li's people send a princess to the Qidan Clan to become a lifelong servant to the Qidan king; but the princess is replaced every few years because of none of them last very long.

In "The Princess and the Po," Princess Mei Li was being offered to Temutai for peace.

Master Po defeated Temutai by holding onto his ears and guiding him into the wall and rocks until he eventually collapsed. Once defeated, the water buffalo offered peace and let the gang go.

Temutai reappeared in "Owl Be Back," in which he fought Master Po again, and claimed that he had a head cold the last time Po defeated him.

In "The Kung Fu Kid", Temutai and his warriors came to partake in the Peace Jubilee; despite a few awkward moments between him and Po, he was honor-bound to commit no violence in the Jubilee. With Po and Shifu, he judged the children's Kung Fu skills until he announced his nephew, Jing-Mei, whom none of the other kids wanted to fight. Before Jing-Mei was announced the winner by default, a young child proposed Jing-Mei fight a young snow leopard. The leopard was hesitant but accepted after Jing-Mei pressured him and wrecked his pottery cart, and he introduced himself as Peng. When the match began, Temutai watched in disappointment as Peng easily defeated Jing-Mei and therefore announced the winner. Temutai wanted Peng to train with him, but Po wanted the young leopard to train in the Jade Palace. Shifu interfered and said it was Peng's choice; he chose the latter, much to Temutai's outrage.

At nightfall, Temutai was confronted by Peng in his tent, desiring to defeat the Qidan Clan leader to prove himself worthy to Shifu, leading to a violent fight between the two where Temutai found himself forced on the defensive. Po eventually intervened, trying to get Peng to stop. But the fight escalated and continues outside in the village, causing an all-out brawl between the villagers, the Qidan Clan, the Furious Five and Peng. Po shouted for everyone to stop and came clean to Peng about his jealousy and apologized. Peng forgave him and the Peace Jubilee ended with the closing ceremony performed by Peng, Po, and Temutai.

Temutai is shown to be a tough, arrogant, manipulative and short-tempered individual. Though he is uneasy to fool, he is very willing to challenge others and prove his might, especially if he thinks he can win a worthy trophy by doing so. Temutai is also extremely merciless, destructive, and unsympathetic, but recognizes when he has been defeated; for example, in "The Princess and the Po", he didn't have any second thoughts about making Princess Mei Li his servant for life, but when defeated, he fairly accepted his loss. Temutai also tends to talk loudly and overemphasize words when speaking. 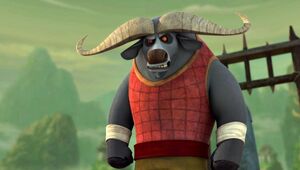 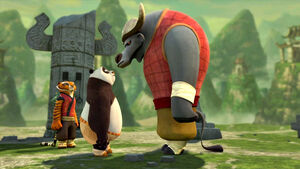 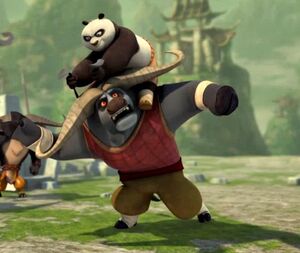 Temutai battling Master Po in "The Princess and the Po". 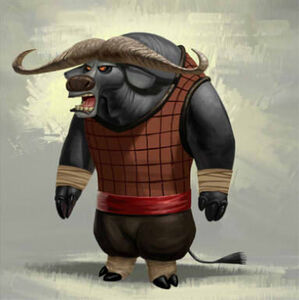