Tengu Brothers are from Ninja Gaiden Sigma 2. They serve as bosses and have other roles.

The Tengu Brothers were a pair of evil creatures who enforced the Black Spider Ninja Clan's Dark Sect. They aided Obaba with his attempt to assault the Hayabusa village. The red Tengu invaded the village but he was confronted by Sanji, one of the young ninjas in training. The Tengu easily knocked the boy into unconsciousness before abducting him. He used Sanji as bait to lure Ryu Hayabusa into a trap.

Sanji was taken to Tokyo and he was left at the front of a shrine's gate. While the trap was being set, the blue Tengu attacked a woman named Momjii who was also Ryu's apprentice. He failed to kill her, though. The Tengu brothers were forced to battle with Monji instead of Ryu Hayabusa. She defeated them but they managed to survive.

Later, the Tengu tried to stop Ryu from reaching Mt. Fuji but they failed. As a final attempt, they battled him in hell. Neither one of the brothers was prepared for what happened next. Ryu used the full might of his dragon sword in the battle. The Tengu were permanently destroyed.

The younger and wiser Tengu brother. He attacked Momiji while they were in Tokyo.

The older and stronger Tengu brother. He assaulted the Hayabusa village and abducted Sanji. 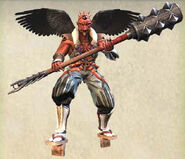 Red Tengu
Add a photo to this gallery

Retrieved from "https://villains.fandom.com/wiki/Tengu_Brothers?oldid=3194847"
Community content is available under CC-BY-SA unless otherwise noted.