Tengu Man is a Robot Master in Mega Man 8 and Mega Man & Bass.

Tengu Man is a experimental robot created to generate artificial typhoons, later being modified by Dr. Wily for combat. Being modeled after a Tengu, he is equipped with jet engines on his back that allow him to fly at high speeds and he is also capable of reading the atmosphere. He is very proud of his nose which gives him quite an arrogant and overconfident attitude (despite his samurai speech). After his defeat, Tengu Man was recruited by King into joining him so King could begin his rise to power.

Tengu Man stays in the air for most of the fight, occasionally descending to attack the player, using his Kamaitachi to deal continuous damage or the Tornado Hold to trap Mega Man for a free hit. He will also swoop down then descend to stomp the player. His weakness is the Ice Wave. In Mega Man & Bass he fights in the same manner, except his weapons work a bit different. He replaces the Kamaitachi with the Tengu Blade, which deals a direct hit, and his Tornado Hold now pushes the player to the edge of the screen. His weakness in this game is the Spread Drill, which causes him to fall, although unlike Uranosu and Burner Man, Tengu Man can survive getting knocked into the pits at the sides of his arena. 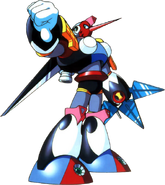