Boasting about his genius.

Conquer Earth with the Sigma Circular.

Become God by digitizing the whole world and forcing everyone to submit to him.

Tenjuro Banno is the creator of the Roidmudes and the overarching antagonist of Kamen Rider Drive. He was a scientist who was Go and Kiriko Shijima's birth father and a friend of Krim Steinbelt. He is also the creator of a knockoff of the Drive Driver, dubbed the Banno Driver, which he uses to transform into Gold Drive.

Banno is a narcissistic inventor who was originally the partner of Krim Steinbelt and worked with him to design the Roidmudes. However, the two split up after Krim discovered Banno was torturing his creations. Banno's abuse of the Roidmudes eventually led to them rising up in what came to be known as the "Global Freeze" and killing him. However, he survived by preserving his consciousness in a tablet and later tricked his son Go into releasing him, allowing him to go forward with his plans. His ultimate goal is to use Sigma Circular to become god by digitizing the entire world and force everyone to bow down to him.

He was portrayed by Masakazu Morita, the voice actor who is famous for the voices of characters like Ichigo Kurosaki from Bleach, Marco from One Piece, Tidus from Final Fantasy X, Auel Neider from Mobile Suit Gundam SEED Destiny and Pegasus Seiya from Saint Seiya Hades: Chapter Inferno.

Banno is a narcissistic human being thoroughly convinced that he is one of the greatest scientists in human history. He repeatedly boasts about his genius, despite the fact that most of his creations were the result of him copying Krim Steinbelt's inventions, is unable to comprehend the idea that he is not as great as he believes himself to be. For anyone who thinks otherwise willing to go to petty lengths to punish them, such as having one of his creations assume the likeness of a billionaire who refused to back his research so he can get revenge by torturing him.

Banno is ultimately a man motivated by his desire to control everything, seeing himself as the closest thing to a god and stating that he will give robotic bodies to those who will appease him. Even as he is pleading with his son not to kill him, Banno still uses the chance to boast about his genius, telling Go that by killing him he would "rob the world of its greatest scientific mind".

While he was working on the Roidmudes, their development became stunted. In order to fix this, Banno asked his friend Krim Steinbelt to assist him. Krim provived him with the prototype Core Driviars to assist the continuation of their evolution. However, when a businessman refused to provide an investment in Banno's research, he became furious and forced Roidmude 002 to assume the investor's appearance so he could torture 002 as if he was the real businessman. When Krim found out, he saved 002 and criticized Banno for committing such a malicious act, which ended up putting both their friendship and partnership to a close. Soon after, Banno implanted an evil chip in all of the Roidmudes containing negative emotions and secretly stole Krim's technology for uploading minds.

Banno's body was later killed by Roidmudes 001, 002 and 003, however he was able to upload his mind into a tablet computer that Brain had taken.

When Go found out the truth, the Kamen Rider decided to go undercover to save his father. With help from Chase, he took Banno from Brain and escaped.

While at first he seemed helpful, it soon turned out that he was actually manipulating them to achieve his own ends. Gaining control of one of the Ride Boosters, he uses it to attack the Riders. Later, with the stolen data from Drive Driver, Banno was able to successfully transfer his will into a brand new Driver he called the Banno Driver.

Banno later tries to steal Medic's body when she attempts to reach her Super Evolution, but leaves her when he decides to use Roidmude 006's body, which he uses to transform into "Gold Drive". Banno also reprogrammed Medic to be killed so his Sigma Circular could have a stabilizer. However, his plans are foiled when Brain sacrifices himself instead.

Banno later initiates his plan to start a worldwide Global Freeze. He fights Go and Chase while the Sigma Circular activates. During this Chase attempts to self-destruct in order to finally defeat Banno.

Banno survives and attacks Mach. Mach used the Signal Bike Chaser to become Kamen Rider Chaser Mach, and starts to defeat Gold Drive. When Banno attempted to paralyze the Rider, Chase's Chaser Viral Cores undid the paralysis by merging with the Rider's armor. Gold Drive/006 was later destroyed with a Rider Kick, though Banno still existed in the Banno Driver. He was finally killed by Go using Shingou-Ax's Full Throttle to shatter the Driver. 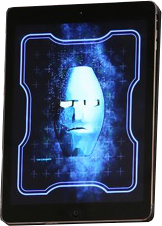 Gold Drive
Add a photo to this gallery 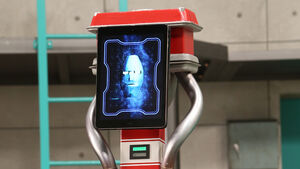 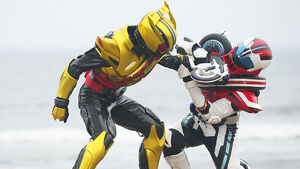 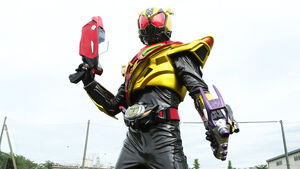 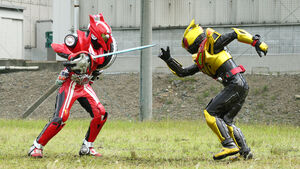 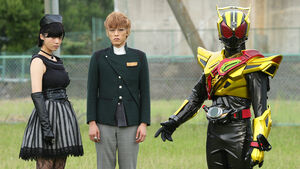 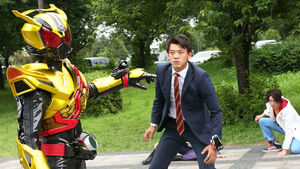 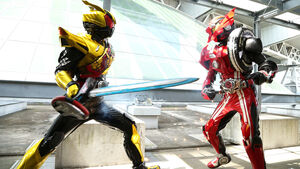 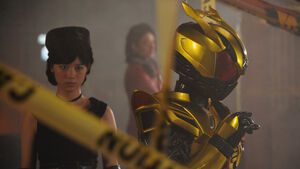 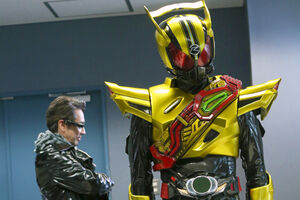 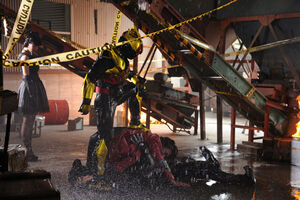 Retrieved from "https://villains.fandom.com/wiki/Tenjuro_Banno?oldid=4082787"
Community content is available under CC-BY-SA unless otherwise noted.