Manipulation of Land and Weather

Manipulation of Temperament by using The Sword of Hisou

Tenshi Hinanawi is a Celestial from Touhou Project. She is known to have the ability to manipulate earthquakes. The sword she is often depicted with is a celestial sword called the Sword of Hisou, a sword capable of cleaving souls in half. She can also use it to manipulate temperament.

Born as a human named Chiko, she was the eldest daughter of the Hinanawi clan and eventually moved with her family to Heaven when they became Celestials. She was then renamed "Tenshi."

Tenshi lived a "boring" life of constant drinking and relaxation in Heaven. This continued until she saw some of the current events happening down in Gensokyo. She decided to use the Sword of Hisou to cause natural disasters in Gensokyo, as a means of attracting the residents so that she could play with them. Her true intent was to resolve her boredom so she could attract others to solve the disaster/incident. Eventually, she helped to rebuild Reimu Hakurei's shrine, but not before causing more trouble involving a keystone and faith going to her clan. It seems Tenshi was literally born just to cause trouble.

Tenshi is an arrogant and selfish Celestial. She is easily bored, and often impulsive in her actions, as shown in the "incident" she caused. She's also childish, seeing as how she considered these actions as simply play despite the serious consequences she proceeded to bring upon herself by perpetrating them. In an interview, ZUN states that the entire plot of SWR came down to "bullying her."

Tenshi has flowing blue hair and brilliant red eyes. She wears a white dress shirt over her blue dress, the cuffs of her short sleeves ornately decorated with gold. A red ribbon is tied around the collar of this shirt. Along with this, she wears a white apron, decorated at the bottom with a black pattern. Attached to this is also a "belt" made of rainbow paper or fabric. She wears brown, lace-up boots which usually come up to about her knees. Of note is her hat, a common source of jokes within the fandom. A fairly plain black hat decorated with two peaches on either side, this has resulted in the nickname "Peaches" among the fans.

Girl of the Sphere of Neither Perception nor Non-Perception

A delinquent celestial living in the heavens.

The Hinanawi clan used to be a family of priests who were tasked to protect their keystone, which kept earthquakes under control.

However, even with the Hinanawi keystone, earthquakes occurred rather often. They occurred so often that it went out of the hands of Oomura-no-Kami, a celestial who was in charge of earthquakes at that time, so the Nawi clan, who had been serving the celestials, was ordered to take over the job around the Gensokyo area.

The Nawi clan was a family of earthbound priests, but were enshrined as divine spirits after their death in a small shrine beside a mountain lake known as Nawi-no-Kami. The Nawi-no-Kami still watch quietly watch over Gensokyo.

At the same time, the Hinanawi clan ascended to the heavens as a reward for serving Nawi-no-Kami when they were still alive.

However, unlike other celestials, the Hinanawis became celestials only by serving Nawi-no-Kami; that is, not through training. So they didn't have the reputation expected of celestials, and some even called them "bad" celestials.

When the Hinanawis became celestials, their daughter Chiko Hinanawi followed them and became a celestial as well, even though she was a young girl.

Chiko renamed herself Tenshi when she moved to heaven. She was not satisfied with how she was treated there, and often looked down on Gensokyo with jealousy toward the humans and youkai living on the ground.

One day, a sudden urge hit her as she saw the youkai on land enjoying using their power to invoke disaster and cause chaos.

"Geez, I'm tired of this boring celestial life! I can invoke a disaster, too!!"

Then she flew from her house, with the Sword of Hisou, a celestial tool, in hand...

Ability to calm or cause earthquakes. Although effective area is not wide, she can cause an earthquake in a remote area as long as it's inside Gensokyo. This ability also allows her to cause disasters such as subsidence or mudslide.

Also, only the Hinanawi clan is allowed to put or remove Keystones in Gensokyo.

It is said that upon removal of the Keystones, all the ground in Gensokyo will tremble.

The Sword of Hisou is a celestial-only item that allows the wielder to exploit the opponent's weakness, no matter what. First, the sword converts the opponent's spirit to scarlet mist, then to the form that everyone can see. As the opponent's nature has surfaced, the sword can change itself to the most effective attributes.

Tenshi thinks that with her Keystone and Sword of Hisou, she can control all heaven, earth, and people.

Personality: Had a sheltered upbringing. Selfish. Top of the world.

She is very earthly for a celestial, and lacks charisma. That's not surprising, however, because she became a celestial only because the entire Hinanawi family became celestials when the Nawi became divine spirits. Therefore, she lacks awareness of what it means to be a celestial.

An overly privileged environment obviously had a negative effect on her playful nature. She doesn't consider what her actions mean to other people.

She has absolute confidence in her abilities, and gets mad if someone insults them. 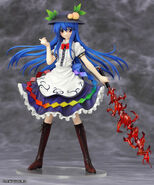 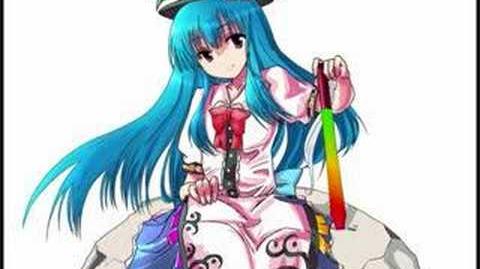 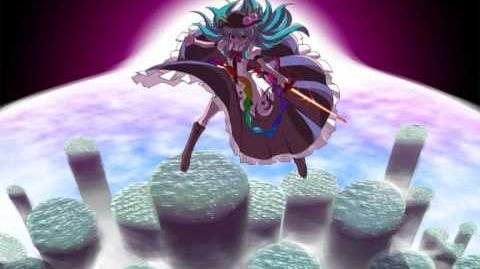 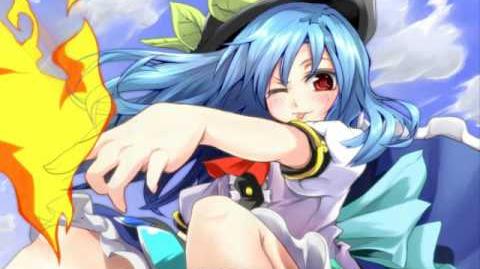