Training to become the best.

Kill Goku for murdering Tao (abandoned).
Defend Earth along with his friends.

Tenshinhan or Tien Shinhan (Funimation dub) is a three-eyed human who is introduced near the end of the Fortuneteller Baba Saga in the anime. Due to his harsh upbringing, he is initially cold and heartless, thinking nothing of exploiting innocents and inflicting pain. However, Muten Roshi and Son Goku eventually help him to see the folly of his master's teachings, and he becomes their trusted ally. He is the main antagonist of Episode 82 "The Rampage of InoShikaCho", the titular central antagonist and anti-hero of the Tenshinhan Saga and a supporting antagonist turned anti-hero in Dragon Ball: Mystical Adventure.

20-year-old Tenshinhan appears at the start of the World Tournament along with Tsurusen'in and Chaozu. Tenshinhan has Chaozu rig the tournament so that he can observe the others and fight the people he wants to. His first match after the preliminaries is with Yamcha. Yamcha is able to put up a decent fight, but even after using an improved Wolf Fang Fist, he is unable to hurt Tenshinhan. Yamcha resorts to a Kamehameha only to have it deflected back. Tenshinhan knocks Yamcha out and then breaks his leg for good measure. When called out on it, Tien, mocks Goku before flying off to enjoy his victory.

He later fights Jackie Chun (secretly Muten Roshi) it is not only a physical battle, but a mental one as well he warns Tien that he is going down an evil path if he does not stop fight dishonorably, eventually he figures out that he is Roshi and defeats him with a Kamehameha (which he learned from watching Yamcha) causing him to forfeit the match, after the match he questions why he gave up since he still had a lot of fight in him, he responds that he is getting too old and that the one of the younger fighters will eventually take his place and that he could be the one to do it if he stops listening to Tsurusen'in.

He eventually faces off against Son Goku in the finals. They seem to be pretty even until Goku suddenly stops moving; as it turns out Chaozu is being forced to control Goku's movements by Tsurusen'in. Tenshinhan tells him to stop as he wants to beat Goku without resorting to dirty tactics, but Tsurusen'in would not let him and he orders Chaozu to continue the psychic manipulation but Chaozu declines, so Tsurusen'in threatens him. It is that moment that he realizes that the Crane Elder was evil all along, as Muten Roshi saves the day and blows Tsurusen'in away with a Kamehameha. With Tsurusen'in gone, the fight resumes and Tenshinhan tells Goku to forfeit who then refuses because he intends to win. He then tells Goku that he will destroy the fighting platform so that Goku will be forced to go out of bounds. Tenshinhan warns him that the technique he is going to use, the Kikoho, is very deadly and that no one has survived it. After using it, he is horrified that Goku appears to have died in the explosion, but as it turns out he leaped up into the sky and chases Tenshinhan. The fight continues until they both go crashing down into the earth after Goku forces him to go down by launching a Kamehameha backwards. Goku crashes into a truck and hits the ground first, making Tenshinhan the winner. Tenshinhan apologizes for his action afterwards and offers to share the prize money, which Goku declines. He also makes peace with Yamacha who says that he forgives him despite longing for a rematch. Both clans then go to the local restaurent to celebrate with Krillin smugly telling Goku that since he changed his mind about not taking half the prize money that he could help treat.

For the rest of Tenshinhan's story see Tenshinhan in Hero wiki. 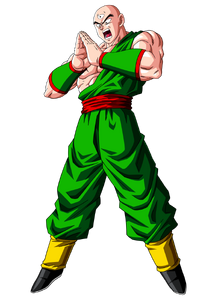 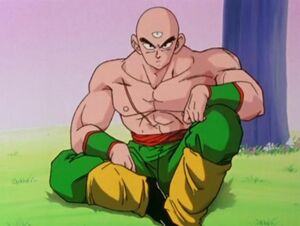 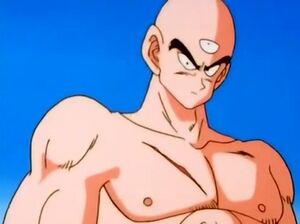 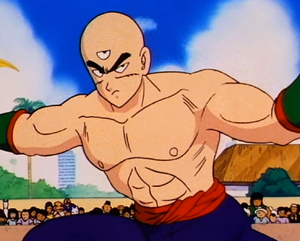 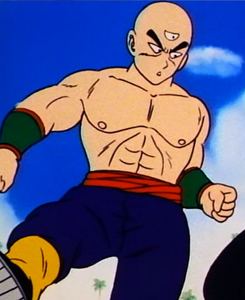 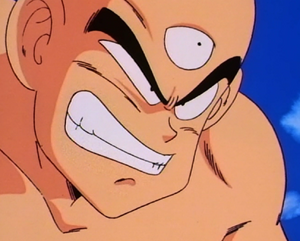 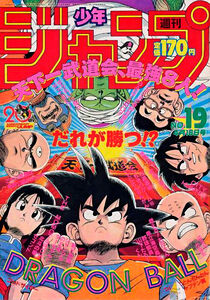