Strong connection to the Force

Training at the Inquisitor base.

The Tenth Brother, formerly known as the Jedi Master Prosset Dibs, is a heroic Jedi, later villainous Imperial Inquisitor in the Star Wars universe. He first appeared in the Jedi of the Republic – Mace Windu comic, which shows the events that turned him against the Jedi, and later in the Darth Vader comic series.

Prosset Dibs is easily the Inquisitor with the most detailed backstory of his time as Jedi, and the story behind his disillusionment with the Order is one rich with detail. Shortly after the Battle of Geonosis, the Jedi High Council sought to discover the truth behind the Separatist operation on Hissrich, a planet in the galaxy's Outer Rim territories. While assembling a special squad for this assignment, Prosset Dibs was chosen by Mace Windu, who felt that the older Jedi possessed a strong intuition in spite of his blindness. Windu also chose Jedi Master Kit Fisto and recently promoted Jedi Knight Rissa Mano to be on his team. He believed that Dibs would provide useful insight and reconnaissance for the mission.

It soon became apparent that Prosset was skeptical of not only the mission, but of the Clone War itself, believing the battlefield was no place for the Jedi.  After arriving on Hissrich, Prosset confided in Windu his feelings of doubt, to which Windu concurred. Dibs and the rest of the squad were soon taken by the planet's natives to theitr home; a series of caverns hidden beneath Hissrich's surface. As the Separatists drilled into the planet, their mercenary commander AD-W4 engaged the Jedi in open battle, causing Dibs to fight alongside Fisto to protect the inhabitants.

Dibs and Fisto were separated from Windu and Mano after the caverns collapsed. Rather than rejoin their fellow Jedi immediately, he insisted that they tend to the wounded inhabitants, to which Fisto agreed. However, they were confronted by a monstrous Milodon. After killing the creature, they realized that the Separatists had come to the planet to harvest its vast natural resources. Wandering through the caverns, they soon found the remains of numerous deceased indigenous inhabitants. Alarmed by the number of deaths on Hissrich, Dibs began to question the Jedi's ability to maintain peace and protect others, to which Fisto countered by stating that casualties are inevitable in war and that the Jedi were now striving to mitigate the loss of life. Dibs, however, remained unconvinced. He then came to the realization that the Jedi Council had known about the valuable energy source on Hissrich all along, and that their mission was more about gaining control of the resources than protecting innocent lives.

After reuniting with Windu and Mano, Prosset confronted Windu for "lying" to him. Conflicted by the Jedi's former dedication toward pacifism and their new role as military leaders in the Clone Wars, discontent and turmoil brewed in Prosset's heart. Shouting at his fellow Jedi Master, Dibs made several accusations against both Windu and the Council, ranging from callousness towards collateral damage to corrupting the Jedi doctrine. Windu, however, refused to even entertain Dibs' claims, dismissing all of them as "bold accusations" and "grand inquisitions." Dibs took this mockery and punched Windu square in the face, causing the High Council member to chastise Dibs for attacking his general. Prosset then ignited his lightsaber, intending to "put an end to Windu's deceptions" by taking his life. Though he felt responsible for failing Dibs, Windu activated his own lightsaber in order to defend himself, resulting in a duel between the two Jedi Masters.

As they fought, Windu beseeched Dibs to cease his attack by reminding him that they were essentially brothers in the sense that they were both chosen to walk the path of the Jedi. Dibs, however, rejected all of Windu's words as lies and declared his intent to sever his ties with the Jedi Order completely and follow his own path. Despite Prosset's resolve to kill Windu, he was ultimately disarmed and bested by the Jedi champion. After a moment of contemplation, Windu decided that the Jedi Council should determine Dibs' fate and therefore arrested him. Leaving Dibs confined in the Westwind, the Jedi proceeded to complete their mission.

A shackled Prosset Dibs was later brought back to the Jedi Temple. Placed on trial for turning against his team and attacking Windu—a Jedi Master as well as a general in the army of the Republic—Dibs stood before the High Council accused of heresy and insubordination. He refused to find fault in his actions and again expressed his belief that the Council was twisting the Jedi Code for their own selfish gain. Ultimately, he was found guilty of treason, but although Dibs expected to be put to death, Windu implored his colleagues to be merciful.

Windu, who harbored his own reservations against the Jedi's new military responsibilities, sympathized with Dibs' frustrations. In Windu's view, Dibs did not deserve to be faulted for feeling anger and confusion, both of which Windu regarded as valid emotions under the circumstances of war. As such, he believed that the Jedi had a duty to help rehabilitate the members of the Order who strayed from the light. Windu therefore requested for Dibs to be placed on probation, confined to work in the Jedi Library, where he hoped the fallen Jedi would reevaluate his opinions. Dibs, however, remained skeptical of Windu's sincerity and as his former friend walked out of the chamber, taunted him that his hubris would be his undoing. Windu later confided in Mano his concern for Dibs and the future of the Jedi Order, but the experience ultimately renewed his faith in the Jedi's role as the protectors of all peoples across the galaxy. Eventually, he tried to kill Jedi Master Mace Windu and was put onto trial, but Windu spared him of death in lieu of rehabilitation that never took hold.

Serving the Empire and Fall to the Dark Side

Three years later, the Jedi Order was all but wiped out by a contingency protocol that ordered the deaths of all Jedi. Dibs's last words to Windu proved somewhat accurate, as the latter was killed due to his failure to anticipate the betrayal of Anakin Skywalker, who became the Sith Lord Darth Vader. At some point before or during these events, Dibs fell to the dark side of the Force and eventually joined the Inquisitorius, a group of fallen Jedi turned agents for Darth Sidious. Dibs was renamed the Tenth Brother. Prosset's rebellious past made him a perfect candidate for Palpatine's recruitment, and he proved a capable Inquisitor, unhampered by his blindness and in fact more greatly in tune with the senses the Force allowed him. Prosset was further unique in dual-wielding lightsabers during his time as an Inquisitor, seldom employing the dual-bladed spinning options of his fellows. Even his death proved unique, as a Jedi he was hunting instigated Order 66 against Prosset, who as a former member of the Order fell victim to the Stormtrooper's sudden bloodlust.

Prosset Dibs was a tall Miraluka male with dark skin, long grey hair, and no eyes. As a Jedi Master, he wore brown Jedi robes and had a black blindfold to cover his empty eye sockets. He also had a black belt around his waist and wore brown boots. Furthermore, he wore beige trousers and had his long hair tied back with a bandanna. He also carried a single-bladed green lightsaber.

When part of the Inquisitorius, Prosset Dibs, now known as the Tenth Brother, no longer had a blindfold and wore grey clothing with black armor plates on his shoulders, wrists and boots with red outlines on the edges. He also had two new lightsabers that were both red. The lightsabers were two separate ones rather than the double-bladed spinning lightsabers that the other Inquisitors used.

As a Jedi Master, Prosset Dibs was a wise, knowledgeable and sharp-witted individual who had exceptional hearing and great intuition of what was around him-in spite of his lack of eyes. For this, he was held in high esteem y his college and superior Mace Windu, who also believed Dibs was capable of providing useful insight and reconnaissance. Dibs himself admitted that he had a large, useful mind and believed his only flaw was his pride in it; or as he called his tendency to "speak about it". Dibs also had a rather sarcastic sense of humor.

Prosset Dibs was a firm believer in the Jedi's role as peacekeepers, and thus disagreed with their new responsibilities as warriors and military leaders in the Clone Wars. During a mission on Hissrich, the heat of the battles and the loss of multiple natives, which he felt the Jedi were responsible for and should never have happened in the first place, greatly increased his doubts. Ultimately, however, it was the revelation that the Jedi Council knew about the valuable energy source held on Hissrich all along that led him to lose faith in the Order and the High Council. Eventually, his disillusionment turned to anger, and he came to believe that the Jedi had not only abandoned their traditions, but were distorting them for their own selfish gain. This led Dibs to turn on Mace Windu with the intention of killing him, only to be defeated and arrested.

During his trial before the Jedi Council, Dibs refused to find fault in his actions, insisting that he had done nothing wrong and the Council were the ones to blame for the war and its losses. He reacted with anger to Windu's decision to spare him and his attempts to sympathize with him, believing the other Jedi was simply "patronizing him" and making him an "example of his false benevolence."

Dibs's disillusionment with the Jedi eventually led him down the path of the dark side of the Force and he became a cruel and merciless Inquisiror, willing to murder without mercy or remorse. 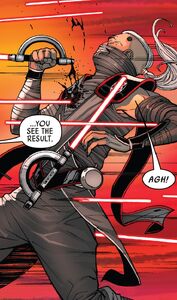