Villains Wiki
Register
Don't have an account?
Sign In
Advertisement
in: Mature, When They Cry Villains, Anime Villains,
and 35 more

Remain unpunished and continue using Rina/Satoko as his source of benefits/slave. (Formerly)

He was voiced by Katsuhisa Houki in Japanese and Steve Kramer in English.

Teppei Hojo is the husband of Tamae and the foster father/uncle of Satoko and Satoshi. He and his wife Tamae were forced to take care of Satoko and Satoshi after the death of their parents, but they abused them. He currently lives in Okinomiya. According to Kasai, he is a procurer and uses his lover Rina to swindle men out of their money. In Tatarigoroshi-hen he is killed by Keiichi as an attempt to protect Satoko, and by Rena in Tsumihoroboshi-hen when he tries to blackmail her father. Shion contemplates killing him in Minagoroshi-hen to protect Satoko, but is stopped by Keiichi before she can make the same mistake. However, in Tsukiotoshi-hen Keiichi doesn't stop Shion, instead he teams up with her and Rena to kill Teppei and just like in Tatarigoroshi-hen, it's Keiichi who gives the final blow. In the other game only arc, Miotsukushi-hen, he was killed by the Yamainu.

Teppei is the brother of Satoko's last adoptive father, and although he has been married to Tamae for quite awhile, he spends most of his time with his lover, Rina. Whenever he spent time in the Hojo household, he usually just watched TV or slept. Tamae was suspicious of his infidelity and subsequently took it out on Satoshi and Satoko. After Tamae's death, Teppei went to live with Rina for a year.

He and Rina are known for playing badger games. Typically, Rina starts faux relationship with different men and persuades them to spend money on her, until Teppei "mysteriously finds these men with his girlfriend", usually set up so that he finds the victim and Rina while they are in bed together. After severely beating the victim, he forces them to pay blackmail money. Teppei often sets a harsh interest rate that is nearly impossible to pay for his victims, causing them to take loans from Rina, until the debt increases and so on. Rena's father is caught in this scheme in Tsumihoroboshi-hen, prompting Rena to take action.

Rina becomes rebellious very often–a trait of hers which he dislikes. During Tatarigoroshi-hen and Minagoroshi-hen, Rina is killed by the yakuza (implied to be the Sonozaki family's doing), forcing Teppei to go back to Hinamizawa to hide for a while. During this time, he kidnaps Satoko and forces her to be his 'pet', making her act like a dog and do all of the work around the Hojo household. He also brings over several friends to play mahjong during these scenarios. In the sound novel, it is said that Teppei is unable to enforce his authority without using scare tactics–hence his abuse of Satoko. After the Child Welfare officer comes by, though, he resorts to breaking furniture in order to scare Satoko into submission. In Tatarigoroshi-hen, he is killed by Keiichi after being lured out to the forest in order to pick Satoko up from the "police station". The only scenario in which he has been successfully arrested for child abuse is Minagoroshi-hen.

In the second episode of Higurashi no Naku Koro ni Kira, Ayakashisenshi-hen, he is one of the four generals of Tokyo Magika. He attacked the storage building of the Furude Shrine alongside the other three generals in an attempt to steal the magic power from the torture devices located within there, and they destroyed the building, scattered the torture devices everywhere, and transformed them into Ritual Tool Devils despite Rika's attempt to stop them from stealing that power. Near the end of the episode, he and two of his fellow generals learn of Takano's defeat but don't take it seriously. Teppei says he wants to be the one to attack Hinamizawa next because he believes his niece Satoko still doesn't know that he himself is one of the generals, and laughs about it. He, Nomura, and Tetsuro Okonogi raise their hands in determination to defeat Oyashiro Rika for the sake of Tokyo Magika.

Teppei later appears briefly in the beginning of Musubienishi-hen. He is the last of the three adults to comment on Keiichi and Mion's relationship (the first being Takano, and the second being Oryou), which they consider to be "falling in love"; he runs into the two while riding a motorcycle, saying that their "sexcapades" make passing a "pain in the ass" for him, before zooming past the two.

As a result of Satoko's manipulations over the loops, Teppei has a series of dreams where he gets killed. Horrified, Teppei also came to realize how much of an abusive man he had been to his niece and nephew. Returning to Hinamizawa, he tries to reconcile with Satoko, even saving her from a biker gang at the cost of getting beaten up himself. However, he opts to leave again when he unwittingly triggered Satoko's trauma when he tried to shake hands with her. Due to it being considered a "miracle" of sorts, it is likely that Teppei would've never changed if not for Satoko's influence. 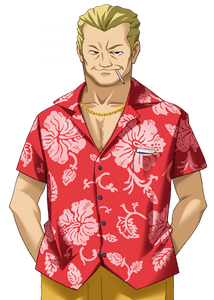 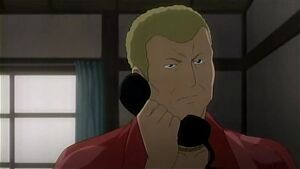 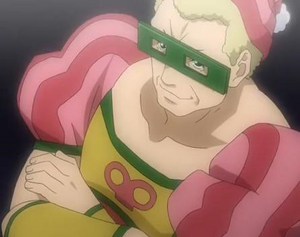