Battlefield Earth: A Saga of the Year 3000

Become the most powerful and richest extraterrestrial being of all no matter what the cost.

Terl is the main antagonist of the 2000 sci-fi/action movie Battlefield Earth based on the 1982 science-fiction novel Battlefield Earth: A Saga of the Year 3000 by controversial author and Scientology founder L. Ron Hubbard.

He was portrayed by John Travolta, who also portrays Billy Nolan in the 1976 film Carrie, Vincent Vega in Pulp Fiction, Vic Deakins in Broken Arrow, Castor Troy in Face/Off, Gabriel Shear in Swordfish, Howard Saint in The Punisher, Emil Kovač in Killing Season, and Ryder in The Taking of Pelham 1 2 3.

In the year 3000, Earth has been ruled for one thousand years by the Psychlos, a brutal race of giant humanoid aliens from their home planet Psychlo. The remnants of humanity are either enslaved by the Psychlos and used for manual labor or survive in primitive tribes living in remote areas outside Psychlo control. Jonnie Goodboy Tyler, a member of one such tribe, leaves his home in the Rocky Mountains on a journey of exploration. He joins forces with Carlo, a hunter, but both men are captured by a Psychlo raiding party and transported to a slave camp at the Psychlos' main base on Earth, a giant dome built over the ruins of Denver, Colorado.

Terl, the Psychlo security chief on Earth, has been condemned by his superiors to remain indefinitely at his post on Earth as punishment for an unclear incident involving "the Senator's daughter". Aided by his deputy, Ker, Terl devises a plan to buy his way off the planet by making a fortune using human slaves to mine gold in radioactive areas. Psychlos are unable to visit such areas due to the explosive interaction of the gas that they breathe with radionuclide particles. Terl selects Jonnie as his "foreman" for the project and gives him a Psychlo education using a rapid-learning machine. Terl gives Jonnie a party of slaves and a Psychlo flying shuttle and orders him to go out and find gold.

After learning the Psychlos' language, history, and myriad other educational forms from the rapid learning machine, Jonnie plots a human uprising against the Psychlos. He obtains gold from Fort Knox to satisfy Terl's demands, instead of mining gold as ordered. Jonnie and his followers find an abandoned underground US military base with working aircraft, weapons, fuel, and nuclear weapons. They use the base's flight simulators to train themselves in aerial combat.

After a week of training, the rebels launch a mass uprising against the Psychlos using Harrier jump-jets and other weapons. Carlo sacrifices himself to destroy the dome over Denver, and the Psychlos inside suffocate in Earth's atmosphere, which they are unable to breathe. Jonnie captures a Psychlo teleportation device and uses it to teleport an atomic bomb to the Psychlo home world. The ensuing detonation causes the entire Psychlo atmosphere to explode, wiping out the planet. Ker and Terl survive on Earth but face different fates: Ker sides with the victorious humans, while Terl is imprisoned as a hostage within a vault in Fort Knox. The film ends with the humans in control of Earth but facing an uncertain future.

"I was being trained to CONQUER GALAXIES!"

Terl hooking Jonnie up to a learning machine. 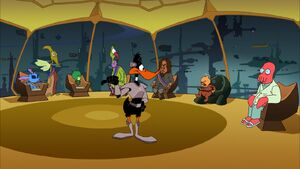 Terl's cameo in the 2004 Daffy Duck short "Attack of the Drones".