Termagant is a demon from medieval legend that arose from a misunderstanding and prejudice of the relatively exotic and unknown religion of Islam in medieval Europe. Much like Baphomet, the Termagant would later be seen as a much older and folkloric entity than she actually was, with her name now being widely used as a symbolism for a troublesome, ill-tempered woman (much like "shrew" or "hag").

Due to medieval Europe's strong Christian beliefs and general mistrust of Islam, many prejudices and confusion came with exposure to Arabic people and culture, one of which was the creation of Termagant, a "pagan" deity that medieval scholars believed the Muslims would worship. This belief would be taken into medieval plays where the Termagant would be used as a stock character and villain, being depicted as quarrelsome and prone to disrupting the peace of Christians.

Very little is known about Termagant's appearance, as it was largely a misunderstanding and defilement of Allah, whom Islam forbid from being depicted in physical form, though in medieval texts, the entity was depicted at times as a turban-wearing creature covered in stereotypical Eastern robes. This was the favored form taken when medieval plays had the Termagant as a ranting villain character, prone to disrupting Christian worship and harassing men and women of the clergy. 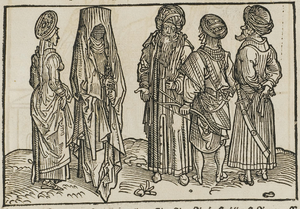