Getting the best grades.

Become the best by any means necessary (failed).

Kill Maxine Gibson so he can be number one in the school (failed).
Kill Batman (failed).

Carter Wilson, better known as Terminal, is the main antagonist in the Batman Beyond episode "Hidden Agenda". He is an all-star student who was driven to lead a gang of Jokerz by both stress and constant abuse from his mother.

He was voiced by Michael Rosenbaum.

At first, Carter seemed to be everything a student could be: smart, handsome, popular, star athlete, class president. Inside, he was morbidly sensitive about his reputation and his sense of achievement; this came from the constant harangues of his cold-hearted mother, who constantly pushed him to be perfect and at the top in everything. At some point, he adopted the alias "Terminal", along with a frightening costume resembling a weird cross between a zombie and an escaped mental patient.

Before long, he had a gang of Jokerz under his personal command whom he dominated through his intelligence and the force of his personality. In part, this may have been his way of rebelling against his mother's strict authority. On the other hand, it was also his unconscious way of lashing out at a world that his mother portrayed as cold and unforgiving to anyone who wasn't "the best".

In the episode, Terminal uses the Jokerz to further his own agenda. After he placed second in the standardized GAT test, behind Maxine Gibson's perfect score, he and his Jokerz invaded the high school at night to delete the test records. During his search of school records, Terminal also found that Max was the leading candidate to be class valedictorian. He tried to delete those records as well, but his access was blocked. He saw no way to his goal of being first other than to remove Max. One night, when Max was working late at school, Terminal had his Jokerz appear outside the school to lure Batman away, then reprogrammed school robots to attack Max inside. Batman arrived back, narrowly saving her. Later, Terminal and his thugs followed Max to a park where she was due to meet Terry McGinnis, and ambushed her. Batman arrived to save her again, and in the ensuing fight, Terminal fell into a fountain, where his makeup was washed off, and he was subsequently arrested. Hearing the news, his fellow students and supposed friends pronounced that they had always known he was a loser.

Terminal returns in the Batman Beyond volume 2 #12 comic. After intense psychiatric treatment, Carter has been cured of his evil persona, but his former gang of Jokerz try to bring him back to his criminal self. In the end, Carter is sent back to juvie hall, but Carter and Terminal are now divided down the middle like Two-Face. They constantly clash for control of Carter's body and soul. 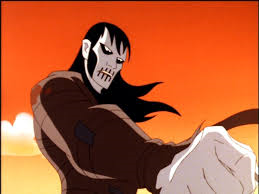 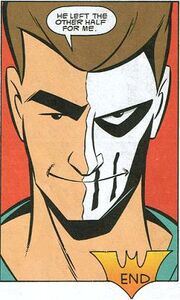 Terminal's appearance in the comics 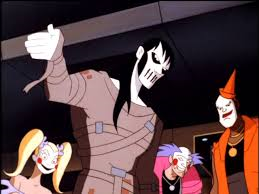 Terminal and his Jokerz gang 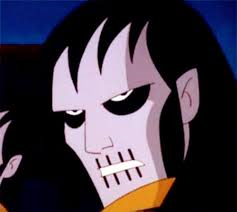 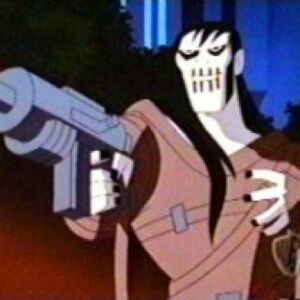 Terminal holding a gun at Max 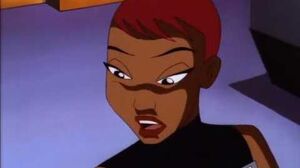 Batman Beyond Max thinks Terry is a Joker 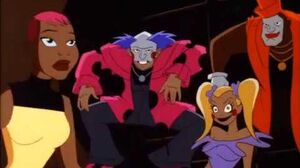