Hanging out with the Titans, giving Slade information

Tara Markoverra, mainly known as Terra, is a recurring anti-villain in the 2003 TV Series, Teen Titans. She served as the anti-heroine in the second season.

Though this iteration of Terra is loosely based on DC Comic character of the same name, she is so far, most sympathetic and heroic as she was motivated to find the way to control her unstable Earth-based powers that led Slade recruit her to his side and abused her as an expendable pawn and weapon. Other reasons of this character far more heroic than the rest is her better redeeming qualities.

She was voiced by Ashley Johnson, who also played the character's Teen Titans Go! incarnation in the 2013 series.

At first, it seemed like a hip and funny young hero who might make a great addition to the team, but Terra had a secret: she was unable to control her incredible powers and abilities over the earth and had accidentally caused natural disasters on several occasions. She felt betrayed when it appeared that Beast Boy shared her secret with the team (even though Robin actually realized it on his own). Feeling betrayed and alone, Terra turned to Slade, who trained her to fully control her abilities. This proved to be a fatal mistake, as by doing so, she had unknowingly forsaken whatever friendships that she had made with Titans and to make matter worse, Slade only wanted to use her as both weapon and disposable pawn, something which she learned in hard way: When she was forced to retreat and asked Slade some help, the supervillain turned against her and manipulate her like a puppet that it took the reasoning with other Titans (particularly Beast Boy) to convinced her to do the right thing by turning against Slade.

According to her brother Geo-Force, Terra was princess whom, along with him, are members of the house of Markov, and their father was the king of Markovia. Scientists experimented on Terra and Geo-Force, giving them their powers, then attempted to exploit them. General Immortus was seen monitoring the experiment, which suggests that he was involved with the human experiment. Geo-Force fought them off, while Terra, unable to control her powers, ran away from home in fear of hurting her loved ones and travels a lot since then. Slade also pointed out that Terra did try to help others over the course of her journey, but on each occasion, something even worse happened as a result of using her geo-kinetic abilities and her own inexperience with her said powers. These troubles, that caused by her by accident ultimately frustated her, in which the said frustation later released on Robin where she stated that she did not want to be rescued and that she was "not some sad little girl".

Upon meeting Terra, the Titans quickly welcomed her into their ranks. At first, it seemed like the hip, funny, young hero might make a great addition to the team, but Terra had a secret: she was unable to control her incredible powers and abilities over the earth and had accidentally caused natural disasters on several occasions. She felt betrayed when it appeared that Beast Boy shared her secret with the team (even though Robin actually realized it on his own). Feeling betrayed and alone, Terra turned to Slade, who trained her to fully control her abilities.

Terra returned to the Titans and joined the team - but was secretly working with Slade to destroy the Titans from within. Despite her mission, Terra began to doubt her loyalties; Just as romance with Beast Boy blossomed, Terra was exposed as a traitor. Hardened and isolated, friendless and emotionally hurt, Terra turned to the only one who would accept her, Slade, and shortly the two united to launch their plans in full motion. Caught off guard and still holding some affection for their former friend and teammate, the Titans were nearly defeated in the first round, with Terra brutally showing far less mercy and restraint, and in the second, due to reinforcements sent by Slade under her control, Robin was forced to make a retreat back to Titans Tower, knowing this battle could not be won.

Soon, Slade assails three different points of Jump City with Overload, Plasmus and Cinderblock, seeking to lure the Titans out of hiding and eliminate their divided forces using Terra. Raven managed to defeat Overload with the aid of nearby water, but was quickly engaged in further fierce combat by Terra, each clearly seeking to kill the other to the best of their abilities. Despite this, analysis of Raven made during Terra's time on the team had enabled Slade to realize her dark powers and abilities were controlled by emotion, and should the emotions run loose, so too would her focus on her own immense abilities. Terra's taunting of Raven eventually causes her to lash out in sheer fury against her, her sheer anger and rage manifesting in Trigon's form, if but partially, and Terra seized this chance to finish off Raven. A boulder projectile intended for Robin was instead the bane of Starfire, which knocked her out and sent her plummeting into the ocean. A sudden yet deadly fissure through the ground (combined with the element of surprise) was sufficient to overwhelm both Cyborg and Beast Boy, who told Terra she could not kill them, but a smiling Terra merely replied, "Watch me," and four Titans were no more. Terra next tried to face off Robin, who, driven with a desire to avenge his friends, yet also honor Beast Boy's wishes to give her a last chance, brutally assaulted her.

While the battle was fierce and neither could gain the upper hand initially, eventually Robin knocks her to the ground and has his staff at her neck. However, he tells her it does not have to be this way instead of finishing her, which allows her to get up and finish him with a boulder. Terra presents Robin's badge to Slade, who begins to launch his plans to seize the city. However, the Titans had each survived Terra's assault and were bent on taking her down, no longer concerned with second chances.

Despite her victory, Terra still felt lost and alone. As the hardened Terra is reminded of her past experiences with the Titans, she appears to be subtly swayed, but claims she has "no regrets" for the horrible things she has done. The Titans furiously and brutally attack her, each showing no mercy, just as she believed they were truly all gone, and with their combined and united forces Terra is quickly defeated by the fivesome, despite her best efforts to strike back at the team. Terra then attempted to retreat, but Slade angrily demanded her staying to continue to fight, and Terra tried her best to do so, but after many near-calls with death at the hands of the now-merciless Titans, runs back to Slade, who begins to physically abuse her in fury and disgust at her defeat. By the time she decided to leave Slade, from both the buried remnants of her conscience and his cruel treatment of her, it was too late. Never truly losing faith in Terra, Beast Boy stepped in between her and Slade and finally made her realize the error of her ways. Events were eventually set in motion leaving the city in danger from an erupting volcano. In a final act of friendship, she ultimately sacrificed herself to save the city. Now merged with the Earth she controlled and manipulated, the Titans searched for a way to restore her. When Trigon was destroyed at the hands of Raven, everyone in the world that was turned into stone was changed back. It is possible that Trigon's death also managed to free Terra from her stony prison but it is still unclear what could have seemingly erased her mind.

Upon returning from a globe-trotting adventure, Beast Boy was shocked to discover a school girl who looked exactly like Terra. Finding Terra's petrified tomb empty, Beast Boy was convinced that Terra had indeed returned - and he pleaded with her to return to the team. None of the other Titans actually met this girl in person, yet each offers separate opinions and theories concerning her, as well as acknowledging neither Cyborg's chemical analysis or Raven's magical mystical spells were effective in reversing the process. (It was never mentioned, but it is possible that after Trigon took over the Earth and turned everybody except the Titans to stone, when Raven defeated her father and everybody reverted from stone to human flesh that Terra reverted back to normal as well.) But the girl insisted that "things change" and she was not the girl he knew, and respecting her wishes, Beast Boy was able to let go of the past and look toward his own future, with the girl to walk down her own path, her back to a past that would be forever lost to her.

In "Teen Titans Go!", a comic book series based on the animated TV series, she makes a few appearances. For example, she appears in Issue #51, which is set after the series finale of the animated series. Terra's brother, Geo-Force, arrives at Titans Tower and relates Terra's origin: she was the Princess of Markovia, and along with her brother was experimented on by sinister interests within the royal court, which gave them both earth-based superpowers. Feeling exploited, Terra ran away, leading to the events of the animated series. At the end of the story, Geo-Force and Beast Boy consider visiting Terra at her school, but decide to leave her be, as she is the happiest she has ever been. 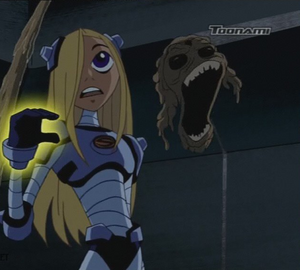 Terra and Beast Boy
Add a photo to this gallery

Retrieved from "https://villains.fandom.com/wiki/Terra_(Teen_Titans_2003)?oldid=3505403"
Community content is available under CC-BY-SA unless otherwise noted.