Spying and getting information from the Titans

To destroy the Teen Titans (including Beast Boy and Raven) (failed)

Tara Markov mainly known as Terra, is a fictional character and a recurring villain in the 2013 DC Animated Super-Hero TV Series, Teen Titans Go!. This iteration of Terra is based on DC Comics supervillainess of the same name. She also appears as a minor antagonist in the video game, LEGO Dimensions.

She was voiced by Ashley Johnson who also voiced Terra's 2003 counterpart.

Terra appeared as the main antagonist in the episodes "Terra-ized", "Be Mine", and "Rock and Water". In "Terra-ized", she appeared as Beast Boy's "girlfriend", but was not even close to being fond with him. Terra only did it just to learn and use all of the Titan's secrets/weaknesses while working for her unknown boss (though fans suspected that her boss' identity was Slade/Deathstroke as he usually being her master/boss). Unlike the original series, where her nature was hidden, Terra does this in a very obvious matter whereas only Beast Boy and Cyborg did not know about it. For her personality, Terra is not nice at all, though her abilities were the same but her proficiency is far better than her 2003 TV series counterpart. In the end, she almost got away with the intel after leaving Beast Boy, but was stopped by Raven, who banished her to another dimension.

In Be Mine, Terra had been stuck in another dimension for 6 months (which revealed as where the Titans throw away their trash). She vows to get revenge on Teen Titans, especially Beast Boy (as he is not a competent pawn to her). On Valantine's Day, Beast Boy helped her escape by using a rope. Beast Boy was still into her, but Terra wanted revenge against the Teen Titans (especially him). While Beast Boy was in denial, Raven was able to show him survelliance of what Terra was doing and saying. At the dance, Terra attacked everyone and right when she was about to get Beast Boy, he sang her a love song, thinking that she had a good side inside herself. Terra was (briefly) touched, but was sent back to the other dimension by Raven; Beast Boy jumped in with her and later licked chili that fell onto her head.

In Rocks and Water, Beast Boy, still sad about blowing it with Terra, begins to repeadtly call her. Terra, fed up with him, informs him that she already has a boyfriend: Aqualad. After Aqualad makes fun of Raven for being single, she claims she's dating Beast Boy and they decide to go on a double date. Robin announces that he and Starfire will be attending, making it a triple date. At the dinner date, Raven tries to get them to break up by ordering calamari, which Terra states he loves. However, this backfires and the two try numerous other times to get them apart. They finally manage to do so however they find out. Terra and Aqualad, now having broken up, attack the two however they're both sent into the trash hole by Raven.

In episode "I'm the Sauce", Terra participates in a game of Heads Up-Seven Up led by Robin as he tried to cheer up the clouds and make the rain stop. It is unknown how she came out of the trash hole, but her rivalry with Raven is shown again. She refused to participate at first, but agreed when Robin bribed them with chocolate milk. Her finger was tapped by Cyborg, but Terra assumed it was Raven and raised a boulder to crush her. Raven smugly shook her head and the boulder fell on Terra and exploded. After the game was over and the clouds cheered, Terra celebrated with the other villains and Titans by drinking their chocolate milk.

In Operation Dude Rescue, Terra, alongside Rose Wilson, and Jinx were recurited by Raven and Starfire in an uneasy alliance to save the boys from The Brain. When Starfire and Raven entered trash hole dimension alongside Ravager and Jinx, Terra ambushed them. Robin and Starfire managed to convince her to join, though Terra initially used the opportunity as ruse to avenge her defeat. Along the way, she sometimes gloated over how she would betray the group but is nearly caught by Raven everytime she did. After fight their way for the boys’ cell, The Brain revealed to have led them into his trap in form of force field that turned out also partly schemed by Terra herself. Dismayed that everything went wrong, they spent their times bickering until Raven recalled why they all here: To save the boys. So, they combined their strength to neutralized the force field, which works due to it only neutralized one power at a time, not multiple powers at the same time. The Brain however, not going to give up without the fight, and revealed to armed himself with a huge battle suit. But nevertheless, they managed to defeat The Brain and goes to save the boys, only for abandoned them in their cells as all of them decided to have fun together due to their annoying Chivalry antics, which started the whole ordeal in the first place.

In Teen Titans GO!, Terra is portrayed more closer to her comic book incarnation, being a sociopath that bereft of positive trait or remorse where she not only outright evil, but also sought any opportunity to find out Titans’ secrets and destroyed them. Although, her psychosis was tuned down to the point that she looked like obnoxious jerk.

In Teen Titans GO!, Terra is already skillful with her powers from start, which is true with the comics. Like the rest of her incarnations, Terra can geokinetically use a large boulder to carry herself through the air, levitating multiple rocks that she puts in a straight line to use as stepping stones to carry others through the air, hurling multiple rocks without physically touching them, etc. Terra's overall skill in manipulating earth was very potent that she can pulled an enormous chunk of rock from the cliff below Titans Tower without causing it to collapse and even create massive fissures and cervices that are deep enough to reach the Earth's core itself (though the latter was with aid of Power Amplifier). Terra's trump card is Terrarizer, geokinetic technique in form of forming concrete exoskeleton around her that bestowing her superhuman durability and strength.

Terra is a tall, pale, teenage girl, with blonde hair. She wears a black short-sleeved shirt, that ends just above her navel. She also wears short yellow shorts, a thick brown belt with a circular buckle, and a pouch on both sides of her hip. She also wears gloves and boots of the same color. She has big, sky-blue eyes. Her mouth design is slightly similar to Robin's. 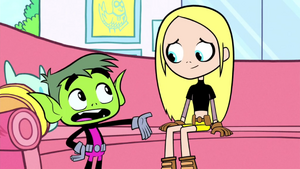 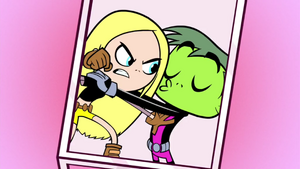 A basic summary of Terra and Beast Boy's relationship. 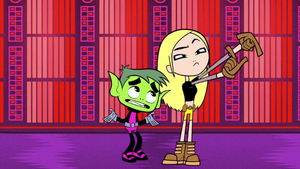 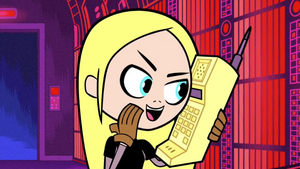 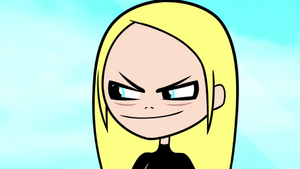 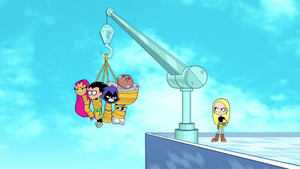 Terra kidnaps the Titans and suspends them over the edge of the tower. 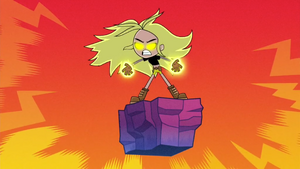 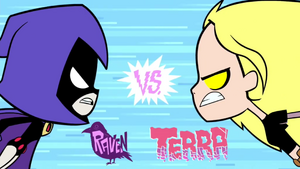 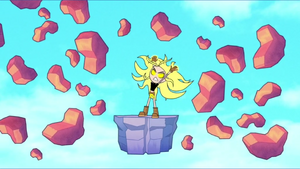 Terra uses a swath of rocks to attack Raven. 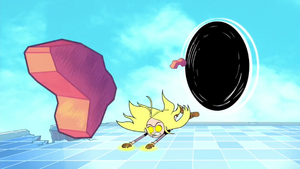 Terra gets sucked into Raven's black hole to the dump at the end of "Terra-Ized", leading to her defeat and imprisonment. 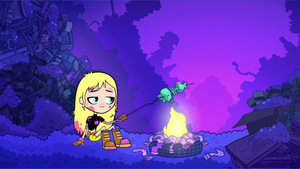 Terra living her life in the trash hole. 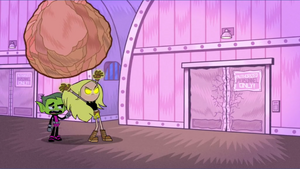 Terra breaks into a building. 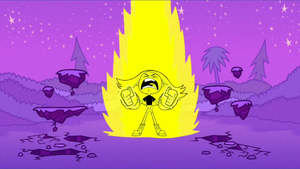 Terra gets ready for war. 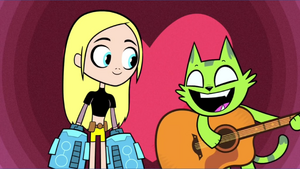 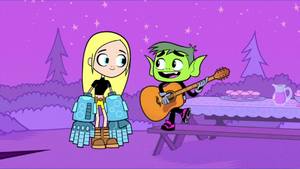 Beast Boy and Terra become boyfriend and girlfriend after he plays a love song for her. 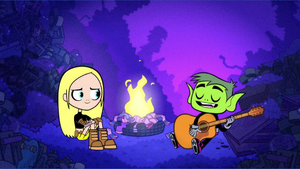 Beast Boy and Terra dating in the trash. 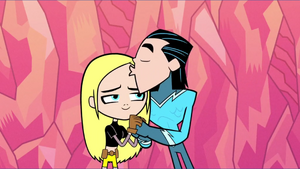 Aqualad and Terra become a couple. 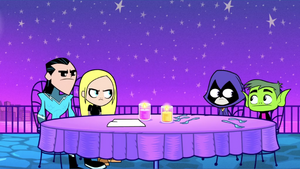 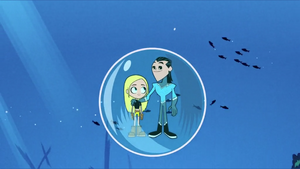 Aquaterra go on an underwater date. 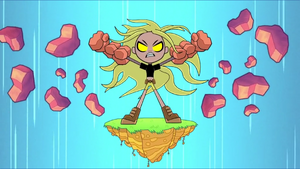 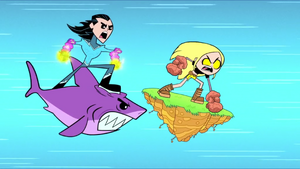 Terra and Aqualad team up in battle. 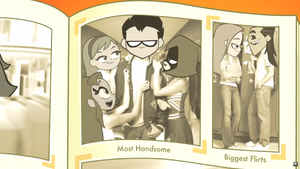 Terra's cameo with her boyfriend, Aqualad in the yearbook. 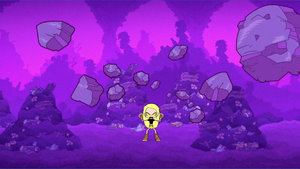 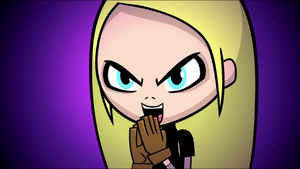 No matter what, Terra will always be pure evil, through and through. 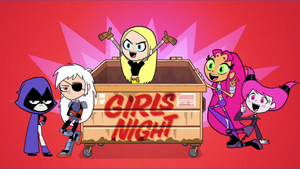 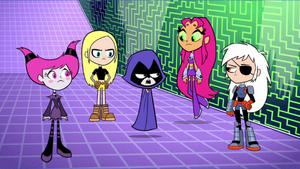 Terra in the Girls Night Out group. 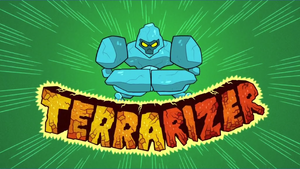 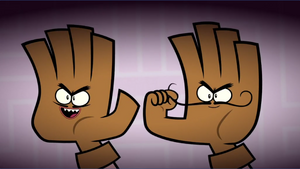 Even Terra's hands are evil. 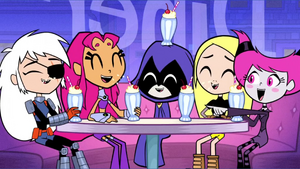 Terra being friends with Starfire, Raven, Jinx, and Ravager.

Terra's cameo in the audience of The Titans Show.
Add a photo to this gallery

Retrieved from "https://villains.fandom.com/wiki/Terra_(Teen_Titans_Go!)?oldid=4158732"
Community content is available under CC-BY-SA unless otherwise noted.