Emperor of the Terran Empire

The Terran Empire are a corrupt version of the Federation from the Star Trek series, centred around the alternate-reality known as the Mirror Universe. They have similiarities to extremist dictatorships such as Nazi Germany or Communist Russia, but they are also in some ways similiar to Ancient Rome or Fascist Italy in the fact they will allow other species into their Empire but only if they comply to its rigid rules and imperial will, while those who resist are either destroyed or annexed via force.

The Terran Empire was founded centuries before the 22nd century. Their space naval force was known as the Imperial Starfleet. In the mid 22nd century the crew of the ISS Enterprise (NX-01) discovered the 23rd century USS Defiant, which had been brought over by the Tholians from the prime universe. After assassinating Jonathan Archer, Hoshi Sato used the Defiant to declare herself Empress and seized control over the Empire.

In licensed novels the Sato Dynasty - consisting of Sato and her clones Hoshi Sato II and Hoshi Sato III - ruled the Empire for over a century. However that was contradicted in Discovery.

By the mid 23rd century the Emperor of the Terran Empire was a mysterious and hidden figure whose actual identity was not widely known. It was later revealed that the Empress was the mirror universe version of Philippa Georgiou

Sometime during 2256 the mirror universe version of Gabriel Lorca crossed over in to the prime universe, where he destroyed his counterpart's ship USS Buran and then assumed command of the USS Discovery.

Discovery encountered the Terran Empire in late 2256 or early 2257 after the mirror Lorca entered a course change during a spore drive jump that caused them to jump in to the Mirror Universe.

After returning to its home universe, the cross over was classified at the highest levels by Starfleet, who feared that dissemination of the knowledge of a mirror universe would lead others to attempt to cross over to that universe. As a result the computers of the Defiant contained no information about the 2256 cross over, and the Enterprise crew had been unaware of the existence of the universe prior to 2267.

In 2267, while the Enterprise was trying to force the Halkans to give up their dilithium to the Empire, a magnetic storm caused the mirror universe versions of Captain James T. Kirk, Lieutenant Nyota Uhura, Commander Montgomery Scott, and Dr. Leonard McCoy to transpose with their primary universe counterparts while they were beaming aboard their respective starships.

When Spock forced the primary universe's Dr. McCoy into a mind meld, he gained knowledge of the Federation and its peaceful cooperation with others regardless of race. The primary universe's Kirk planted further seeds of doubt in Spock by pointing out the illogic of supporting an Empire doomed to failure, and to try a new way. Before beaming Kirk and his primary universe counterparts home, Spock told Kirk he would consider Kirk's words.

Following the return of everyone to their home universes, attempted to convince Kirk to spare the Halkans. Kirk refused and had the Halkans destroyed. Spock killed Kirk in his quarters, and assumed command of the ISS Enterprise.

Rising in power and influence, Spock became Emperor of the Terran Empire in 2277 after killing Hoshi Sato III. By the 2290s, the Terran Empire had been suceeded by the Terran Republic, with Spock having been elected as the First Counsel of the new Republic. It was then that the Klingon-Cardassian Alliance struck, attacking the Republic. Spock and Marlena Moreau died on Earth when the planet was conquered by Regent Gorkon, and the surviving humans were forced into slavery.

As he rose in rank, Spock attempted to make a series of reforms to make the Empire a more benevolent and ethical institution, and for a time he was successful with his reforms. However Kirk had been jealous of Spock's subsequent success, and arranged for evidence to be planted in Spock's quarters making it appear that Spock had committed treason. Spock was executed a short time later, with his father being assassinated by another Vulcan not long afterwards.

In the series of novels written by Captain Kirk actor William Shatner Spock did not kill Captain Kirk after the cross over. Constructing a ruse that the Halkans were a client state of the Klingon Empire, Spock convinced Kirk to spare the Halkans on the grounds that destroying them would spark a war with the Klingons. Kirk received a commendation from the fleet for avoiding a trap that would have plunged the Empire into war with the Klingons.

Kirk grew in power and influence, with Spock at his side, eventually becoming Emperor Tiberius. Spock became the power behind the throne. Spock built up his own power base and then overthrew Tiberius in 2277. After being overthrown Tiberius went to the Klingons and Cardassians, convincing them to invade and conquer the Empire. Spock went underground, working with the Vulcan resistance for the next century.

In the game Star Trek: Online in one permutation of the Mirror Universe the Terran Empire was re-established following humanity's successful rebellion against the Alliance. By the early 25th century the Empire was once again a major power in the Alpha Quadrant. 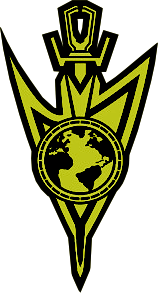 New Symbol by the year 2250
Add a photo to this gallery
Retrieved from "https://villains.fandom.com/wiki/Terran_Empire?oldid=3329031"
Community content is available under CC-BY-SA unless otherwise noted.