Benji: Off the Leash!

Abusing his family and dogs.

Breed his dogs to make money.

Kill Benji and prevent him from becoming a super-star (failed).

Terrance Muncy Hatchett is the main antagonist of Joe Camp's 2004 film Benji: Off the Leash!. He is an abusive dog breeder who abuses and mistreats his family and dogs and runs a brutal puppy-mill operation in his backyard.

He was portrayed by Chris Kendrick.

He is the abusive stepfather of Colby and husband of Claire and runs an illegal puppy mill in his backyard. He usually breeds rare animals and a black dog named Daisy is his most prized breeder. One day, Colby takes Daisy to an abandoned house where he feeds her and a light-colored mix breed is born. Hatchett arrives and is infuriated by Colby for stealing Daisy. He discovers the mix-breed puppy and throws it across the room. He orders Colby to bring the other puppies and verbally leaves the mix breed to die. The following night, Colby sneaks out, rescues the puppy and brings it to his hideout, where he nurtures it to health and has his pet cockatoo, Merlin watch over it.

10 months later, the puppy is fully grown and Colby is concerned about it. He returns to his fortress, but discovers that Benji and Merlin have disappeared. Benji returns and Merlin comes back to warn Colby as Hatchett discovers his hideout. He notices Benji and tries to deal with him, but is interrupted by the two Animal Control officers named Livingston and Sheldon, giving Benji an opportunity to escape. They warn him about his breeding factory, but he lies to them that he rarely breeds Daisy. Benji returns to the mill and is horrified to see the way his mother is being treated.

The following night, Benji returns to Colby's hideout and Merlin warns him as Hatchett ambushes him. However, Benji bites him and manages to escape, while Hatchett swears revenge on him. The next morning, the officers return and follow Hatchett to a river, where he throws a bag of dog litter in the river. The pair witness it and confront him over the situation. Hatchett claims that it was his lunch, but they refuse to believe him. A stray named Lizard Tongue follows Benji to the mill and tries to take a look at the factory, but the stack of boxes fall over and Hatchett drives him away.

The next morning, Benji tries to come up with a plan to rescue his mother, but is distracted by Lizard Tongue. He tries to help Benji, but knocks over a stack of trash cans as he jumps down. Hatchett comes out and tries to kill him until he's distracted by Benji. He tries to attack Benji, but Colby stops him. Hatchett pulls him off and orders him to feed the dogs. Meanwhile, Colby places a stick onto the latch, so Benji can open the door and get to Daisy.

Benji returns to the mill and manages to free Daisy, while Colby distracts Hatchett to give them an opportunity to escape. The following night, Hatchett takes Colby to the abandoned house to look for Daisy as he accuses him of stealing her again. He searches the house, but gives up and leaves as Colby cracks the door open for Benji and the mother to get in. Benji tries to get the officers' attention, but to no avail. Sheldon believes Benji, but Livingston remains unconvinced. The shelter director receives a phone call from Hatchett and sends Ozzie. Benji gets Lizard Tongue and the two officers follow them to the building, where they find a sick Daisy and decide to take her to the clinic. The shelter director tries calling Hatchett and asking him about Daisy, but he refuses to listen and they decide to have her cured.

The next morning, Hatchett becomes infuriated and confronts the director over the situation. Hatchett inadvertently reveals that she was his prized breeder, to which Ozzie realizes that he lied to the officers about Daisy and he threatens to take them to court. He then learns that the Benji film producer is in town and wants Benji to be the new star and intimidates Colby into lying about being the owner. Claire refuses to go, but Hatchett threatens her and forces her to go with them. At the shelter, Benji is reunited with his mother and Colby tells everyone the truth about the dog. Hatchett loses his temper and attacks Colby, but Ozzie stops him and carries him outside, where he keeps watch on him. Claire informs them about Hatchett's behavior and reveals a bruise on her head. Hatchett tries to flee, but is apprehended and carried back inside by the security guards outside. Ozzie informs them that he won't do any more harm to them and he will receive help in the meantime, indicating that he will be put in a mental institution.

Hatchett is an extremely abusive, heartless, cruel, sadistic, emotional, sociopathic and malicious man who only uses his dogs to get money. Although never shown, it is implied that Hatchett hits his wife and potentially even Colby. He abuses to them verbally and emotionally to the point of striking fear in them. He refuses to listen to Colby to breed the dogs properly, which almost resulted in Daisy's death. 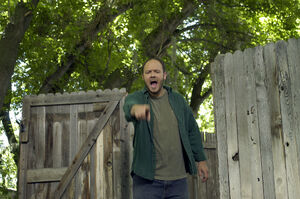 Hatchett shooing Lizard Tongue away from his property. 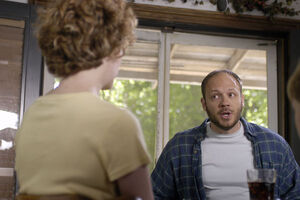 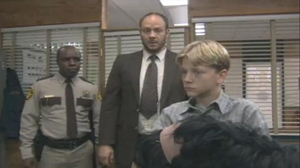 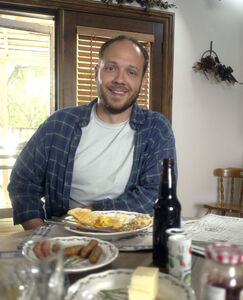 Hatchett smiling at the camera. 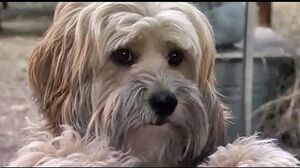