Avoid punishment for his laziness (failed).

Terrence Chesterfield, also known as The Liability, was the 3rd Elusive Target in HITMAN III. He was a disgraced English building inspector walking around Club Hölle in Berlin, Germany to inspect the site.

He was voiced by Richard Stemp.

Pampered since childhood, Terrence Chesterfield obtained his job as a building safety inspector through his parents' connections. Unwilling to put even the littlest of efforts into his job, Chesterfield deliberately ignored any potential dangers, breezing through his job so that he could return home early to watch his shows. Corrupt landlords, managers and property owners found him to be a useful tool as his lax inspections prevented them from having to spend money on renovations.

When buildings that Chesterfield "inspected" suffered accidents, collapses and explosions, a local landlords' association "charitably" paid for his defence and got him acquitted. However, now completely disgraced in England, Chesterfield relocated to Berlin, where he continued to work as a building inspector. However, members of a private fund used to help Chesterfield's victims believed that his incompetence would lead to another accident and put a contract out on him.

At the time of his death, Chesterfield was assigned to inspect Club Hollë. As usual, he puts in minimal effort: accusing a injured man of faking his accident, taking naps and ignoring potential hazards. He is followed around by Marion Keen, the daughter of one of his victims (presumably placed to spy on him), who is frustrated by his incompetence and laziness.

Chesterfield is extremely lazy. He takes naps frequently, tries to avoid having to do any work, and looks for shortcuts wherever he can. He is exceptionally greedy, caring only about money, being extremely flippant towards his job and responsibilities.

He is also lacking empathy, trying to brush off a badly injured man as merely being an actor. Despite all the deaths he has caused, it's implied that he's profoundly apathetic rather than sadistic.

He seems to enjoy old television shows, wishing to finish things up so he can go home to watch them. It's noted he spends more money buying box sets than on materials for his buildings. 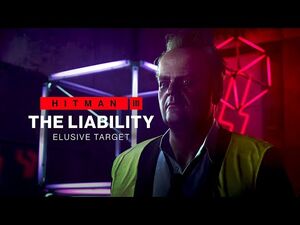