Man-eating Monster
Terror Toad is an antagonist from the TV series Mighty Morphin' Power Rangers who appeared in the episode "Power Ranger Punks".

After Rita Repulsa minion named Baboo poisoned the Power Rangers Billy and Kimberly, turning them into punks, Rita requested her minion Finster to create the Terror Toad to deal with the remaining Rangers; Jason, Zack, and Trini. The Terror Toad was then sent to Earth where it began to terrorize Angel Grove. The Rangers saw this on the Viewing Globe at the Command Center and Zordon sent them to combat the monster, while he and Alpha worked on a cure for Billy and Kimberly.

The Rangers began to fight the monster, attacking him all at once, but the Terror Toad easily repelled them. He continued to fight the Rangers, dealing several damaging blows, but taking no damage himself from the Rangers' attacks. He then isolated Trini, the Yellow Ranger, and took a swipe at her, knocking her to the ground. The Terror Toad conjured a large yellow mouth from his horn, which in turn shot out a long yellow tongue. The tongue coiled around the Yellow Ranger and transformed her into a small yellow orb. The orb then flew into the Terror Toad's mouth and he swallowed her. As he complimented the Ranger's taste and patted his belly, an image of the Yellow Ranger's helmet appeared on it. Jason and Zack then fired their Blade Blasters at the Terror Toad, but he reflected the attacks with a shield emanating from his belly. 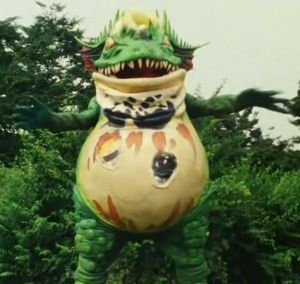 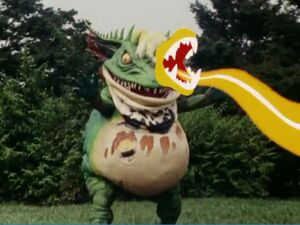 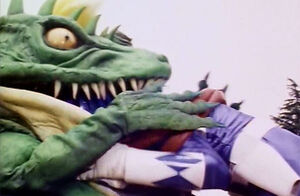 Retrieved from "https://villains.fandom.com/wiki/Terror_Toad?oldid=4049443"
Community content is available under CC-BY-SA unless otherwise noted.