Destroy everything in sight (failed).

Cliffjumper is a Terrorcon in Transformers Prime. He was once an Autobot partnered up with Arcee until his death and revival by the hands of the Decepticons through Dark Energon.

He was voiced by former WWE wrestler Dwayne Johnson, who also played Mathayus the Scorpion King in The Mummy films, Sarge in Doom and Agent 23 in Get Smart.

While driving down a road during a scouting mission, Cliffjumper detected an energon deposit. When he went to investigate, the Decepticon ship known as the Nemesis arrived and he was soon surrounded by Decepticon Troopers.

Though he defeated a great many of them he was eventually defeated. The Vehicons dragged him into the Nemesis and brought him to Starscream. When Cliffjumper refused to tell Starscream where the Autobot base was he was executed.

Upon Megatron's return he requested a body to test the legend that Dark Energon could revive the dead. Starscream wheeled Cliffjumper's body in and Megatron stabbed a shard of Dark Energon into Cliffjumper's now empty spark chamber. Dark Energon flowed through Cliffjumper's veins and he awoke. However now he was merely a zombie, or Terrocon, who's only purpose and thought was to destroy everything in his path. He immediately attacked a couple of Vehicons before charging at Megatron who sliced him in half.

The Autobots arrived at the mines later when Ratchet detected Cliffjumper's energy signal. Arcee spotted Cliffjumper on a ledge and went after him. She started to pick him up to get him out of the mine when he attacked her. Before he could deliver any major blows however the ledge was shot down sending falling into a pile of energon.

Stasrcream flew in and dropped a bomb to prevent the Autobots from seizing the energon. Zombie Cliffjumper died in the explosion. 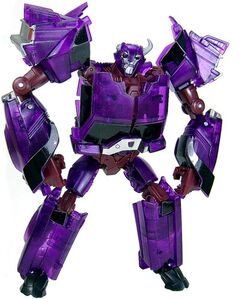