Gain control of Earth and Nebulos.

The Terrorcons are a minor antagonistic faction in Generation One of the Transformers franchise. They are a group of Decepticons who transform into monsters.

The Terrorcons debuted in the late third season episode "Grimlock's New Brain", in which they accompanied Galvatron on his mission to salvage anti-electrons from the head of Unicron. They were defeated by the newly-created Technobots, who formed Computron to defeat the Terrorcons' own combined form Abominus.

The Terrorcons also appeared prominently in "Money is Everything", in which they pursued a human smuggler on behalf of the Quintessons to try and gain the device he was transporting and were again defeated by the Technobots, and "Call of the Primitives", in which they were among the animal-form Transformers who were abducted to combat Tornedron.

In the concluding miniseries "The Rebirth", they were part of Galvatron's attack on Cybertron before being evacuated by Scorponok.

The Terrorcons first appeared in the Headmasters miniseries in which they were among the Decepticons who accompanied Scorponok to Nebulos, taking part in attacks on the natives which were fought off by the Autobot Headmasters and the Technobots. They appeared in the mainstream comic in the Underbase Saga, where Scorponok's Decepticons had relocated to Earth. After battling against both Ratbat's Earth Decepticons and the Earth Autobots, they were finally deactivated by the Underbase-powered Starscream.

The post-movie versions of the Terrorcons appeared in the Marvel UK story "Time Wars", where they functioned as Soundwave's henchmen in his failed attempt to drain Earth's energy, although Hun-Gurr had to recall them from terrorising a human city for fun. After being defeated by Kup, Arcee and Red Alert, they pursued the Autobots back to 1989, where they became caught up in the battle with the time-displaced Galvatron and quickly retreated back to their own time. Terrorcons in robot mode from cartoon 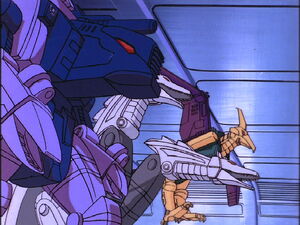 Terrorcons in beast mode from cartoon 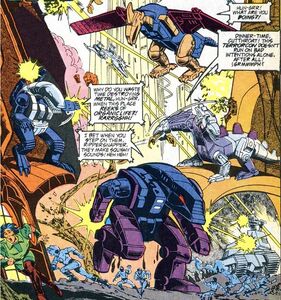 Terrorcons (minus Sinnertwin) in beast mode from Headmasters miniseries 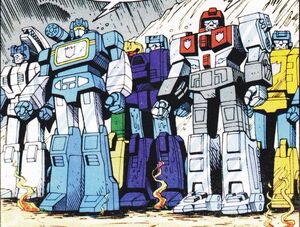 Terrorcons in robot mode led by Soundwave from Time Wars