Turn the church into mosque

The Terrorists are a group of Islamists that arrive at Paradise and Catharsis to commit acts of terrorism, led by Osama Bin Laden, and an antagonistic group since Postal 2.

On Tuesday, after Postal Dude confessed the sins in the church, the terrorists assaulted the church, declaring war on infidels, the other priests comes up to fight and Postal fights them off till he left the church. The next day, it is revealed that the church has been turned into a mosque, when Postal goes to cemetery to piss his dad's grave. Also, the terrorists begin to dig some coffins out of the cemetary. The sign outside of the Church reading "Our Lady of Insatiable Avarice" has been turned into "Our Lady of Insatiable FIDEL Avarice."

When Postal enters Lucky Ganesh, there are terrorists, in which it turns out to be one of their headquarters.

The terrorists are revealed to have taken control of the Obligatory Sewer Complex, which is the only way to reach Tora Bora where the terrorists seem to have their main headquarters. At the very end of Tora Bora, a group of elite terrorists appear carrying the most powerful weapons including the WMD and the Mini Nuke Launcher.

At the training camp, Postal, instructed by Vince Desi to make some marketing strategy so that the media would say RWS's competition is toasted, fights the terrorists off to search the thermo-nuclear warhead but it is not there. During this time, the National Guard arrives and starts bombing the place, arrests the Postal Dude (mistaking him for a terrorist) and several terrorists and takes them to the military base. Dude proceeds to place his terrorist cellmate on fire to activate the fire alarm and open his cell to escape the base.

One of the elite terrorists is later seen in Lower Paradise leading a meeting that is attended by other terrorists, vegetarians, civilians and Gary Coleman. All of them fights against Dude alongside zombies and military.

11 years after the events of Postal 2, Bin Laden and the terrorists have started smoking marijuana and as a result have renounced their violent ways and become a peace-loving organization, dressing in multi-color, tie-dyed "hippie" versions of their original outfits.

At Thursday, terrorists rescue P.D. when he collapses after escaping from the ColeMine, and help him on Friday by building him an IED so he can destroy the seal on the Hell Hole and rescue his dog Champ. In exchange, the terrorists request the Postal Dude to prune the herbs of the Medicinal Herb Farm with the aid of Uncle Dave.

At the end of Friday, after receiving the IED from them, the Postal Dude ruins their relationship by reminding them they were promised 72 virgins for slaying infidels. Remembering this, Osama and the terrorists renounce their peaceful ways and chase the Postal Dude out of their base.

If Dude chooses to go on The Insane Path, then they will have a mission where Osama will tell the Dude to deliver a box containing Krotchy dolls to Krotchy in the mall.

In the filming they certainly occupy an important place. At the very beginning, two of them are being kidnapped by a plane that breaks into the World Trade Center tower. Osama is coming up with a new plan. He intends to lead to an outbreak of bird flu in the town of Paradise. The perfect carriers are the dolls from the Krotchy series, in which the vials with the virus should be placed. They go to a party where toys are to be sold for the first time. The same idea came from Dave - Uncle Buster - who needed them to sell at an inflated price and pay off debts. A shooting takes place, resulting in the loss of many innocent people. The Taliban decide to hunt down fugitives and take away their "property". Eventually, after many vicissitudes and subsequent shootings, almost all terrorists die. The final scene shows Osama in the company of his best friend George W. Bush. 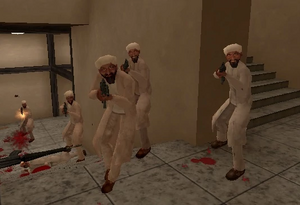 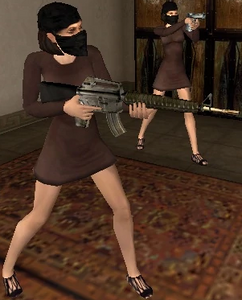 Add a photo to this gallery
Retrieved from "https://villains.fandom.com/wiki/Terrorists_(Postal)?oldid=3199253"
Community content is available under CC-BY-SA unless otherwise noted.