Attack and destroy everyone and everything that they come across (failed).

The Terrors are major antagonists in Season 1 of the TV series Marvel's Cloak & Dagger. They are a species of people infected by the simultaneous Darkforce and Lightforce explosion caused by the Roxxon Corporation, and later from the company's underground pipelines years later.

Roxxon Corporation had planted an oil rig in New Orleans under Peter Scarborough's orders, when they had found out there was a supernatural power source within the city. They implemented various pipe valves in New Orleans as well that connected to the rig. Prior to the rig's explosion, parts of the facility became faulty and some of the energy was contacted by some of the workers there.

Eight years later, the pipe valves across New Orleans began to emit the mysterious energy once more, infecting an even wider population of Terrors across the city and began to terrorize its civilians. Peter Scarborough revealed that the valves were connected to one energy compartment building, where all the power is coming from. The superhero duo, Cloak and Dagger, went to the building, absorbed all the energy inside, and dispersed it into the sky, seemingly ending the flock of Terrors.

However, after Detective Brigid O'Reilly was revealed to have survived Detective Connors' assassination attempt on her and that she was exposed to a combination of Darkforce and Lightforce energy, it is possible that she may be a new evolved version of the Terrors.

Upon infection, the people that become Terrors are granted superhuman abilities. However, they are reverted to a primal state and are thus very hostile. Regular people can turn into Terrors by being in direct contact with them as well. 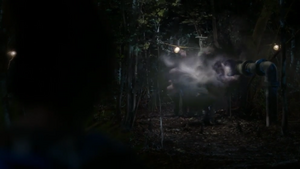