Playing chess with the AI opponents.

Consuming Structure Gel (all prior to his mutation).
Serving WAU.

Kill anyone nearby or forcibly connect them to WAU.

Terry Akers is a major antagonist encountered in the 2015 survival horror video game SOMA. Unlike most creations of the WAU, Akers willingly infected himself and sought to spread its influence throughout PATHOS-2.

His audio recordings are voiced by Brian Protheroe.

The past of Terry Akers before the events of the game is never touched upon. Even his true appearance prior to being killed and transformed is a mystery. Audio logs of the man can be heard, indicating he is most likely from the Southern part of the United States, given his accent.

Other logs tell that Akers was extremely skilled at chess, even beating AI opponents at the game 1,000 times.

Knowing what the WAU was doing, he stayed back at an underwater station known as Delta, while the rest of his team moved to another known as Theta. While staying back in isolation, he consumed large amounts of Structure Gel, which began to take a serious toll on his health and sanity, even the to point of removing his own eyes because he heard a voice stating that "he did not need them to see".

At some point during his isolation, Akers decided he wanted to relocate to Theta along with the rest of his staff. When a team of divers came to retrieve him, he ambushed them and brutally murdered all of them, and even made sure their communications were cut so they couldn't call for help in any way. Akers then escaped in a Zeppelin used by the very people he killed.

Akers was found in the Zeppelin motionless, then taken in by a doctor (Nadine Masters) who assumed Akers would never wake again. Akers then rose up from his hospital bed and bashed Masters' skull in before she could finish any reports. This doctor is later found in a comatose state being kept alive artificially by WAU.

One staff distracted Akers with plenty of noise, allowing others to escape the area Akers was patrolling.

Terry Akers will shamble around aimlessly, making shrieks and gurgles at random times. He cannot see the player, but can easily hear anything they do, and can also open doors. Due to his increased sense of hearing, the slightest noises, even the faint clicking of the player's flashlight, is enough to get Akers' attention. This means the player must stealthily crouch-walk the entire time when in Theta.

When Akers is out of the player's view, he can then be heard shifting through the vents, and will escape these vents near the player if he hears any kind of sound or after enough time has passed by. This means the player must be silent even when Akers is not even seen. He searches more aggressively once the power to Theta is shut down.

Once the player is about to escape Theta via elevator, Akers will give chase no matter what. While the player is escaping Theta by activating a flush system, Akers appears one last time in the game in the tunnels trying to prevent Simon from escaping, but before he could do anything, both he and the player are swept away by the drainage system. Akers is not seen again after the event, so his fate after this is unknown.

Terry Akers appears more humanoid than what's normally seen of WAU's creations. His skin is highly discolored, and is covered with numerous, bulbous cancerous growths. There are no facial features aside from two gaping holes where his eyes used to be, and a large bisection down his body starting from his head. It is likely the doctor that took him in created this bisection.

Though Akers' zombified, grotesque appearance would show otherwise, Akers is insanely strong and fast, and can overpower the player instantly. 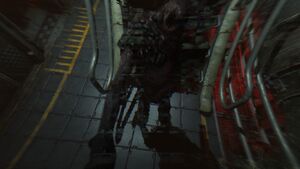 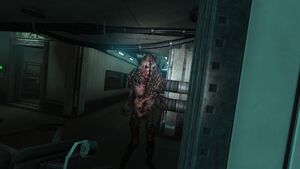 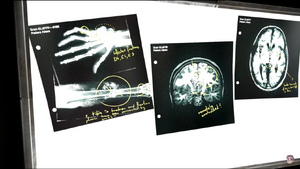 An x-ray of Akers. 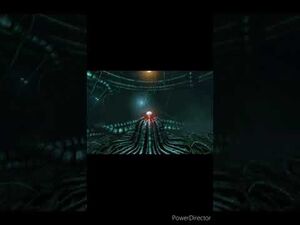 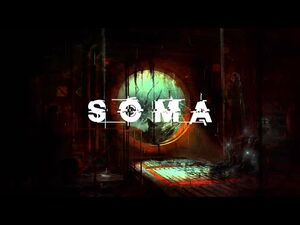 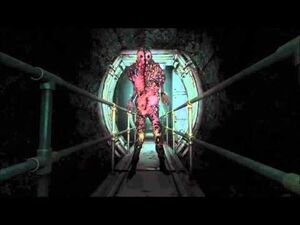