Trying to flirt with female students.

To get out from Killing School Trip (failed).

To stop Ryota Mitarai from brainwashing the world with hope (Succeeded).
To atone for his actions as Ultimate Despair (ongoing).

Teruteru Hanamura is one of the characters featured in Danganronpa 2: Goodbye Despair.

He has the title of the Ultimate Cook.

He plan to murder Nagito Komaeda when he saw that he attempts to kill someone, but he ended up accidently killing Byakuya Togami in Chapter one. In reality both him and Byakuya Togami are still alive.

He is voiced by Jun Fukuyama in the Japanese version and by Todd Haberkorn in the English version of both the anime and game.

In chapter one, he noticed Nagito putting the knife under the table and ended up being scared that there was gonna be a murder so he plans to kill nagito from stopping a murder happened. However he accidently ended up killing the Ultimate Imposter with the iron skewer instead of Nagito under the floorboard.

After he has been caught as the killer of the Ultimate Imposter in the class trial, he admits that he wanted to see his mother again, and at the very end, cries out for his mother before being executed by Monokuma.

In the real world he and all his classmates are still alive and manages to convince Ryota to not brainwash the world with hope, and decides to shoulder the blame for the killing game and retured to Jabberwalk island on a boat.

In his normal self, he wears a chef's outfit with a red apron that has an E with a big circle in the middle with 3 stars on the right side, a red scarf on his neck, a chef's hat, and dark brown hair. He also wears black pants and brown shoes with black laces underneath his apron.

Unlike his normal self, as ultimate despair, Teruteru wears red clothing's with a large chef's hat, a yellow scarf and is carrying foods in his backpack. 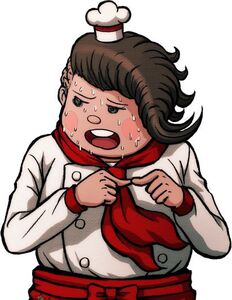