Teryxes are a race of Creatures of Grimm resembling a hybrid between Dromaeosauridae and Pterosaurs from the American animated webseries RWBY.

Teryxes have large bodies resembling Dromaeosauridae (or "raptor" dinosaurs), with stout, bipedal structures and long limbs tipped with claws and a spiked tail. Their heads have bone plating and frills, and their mouths are full of sharp, small teeth. In addition, they also possess large, Pterosaur-like wings on their back, which are black with red veins.

Like other Grimm, Teryxes were created by the God of Darkness in an attempt to rid the world of life, and remained even after he and the God of Light abandoned Remnant. They later fell under the control of Salem.

After Arthur Watts shuts off Mantle's heat and security systems, causing panic, Teryxes are among the first Grimm to begin attacking the city and its civilians. They attack the airships coming to help, with one even clawing a hole in the one carrying Team RWBY and their allies. Though it is able to be fought off, a swarm descends on the city, hindering evacuation efforts.

Teryxes use their massive wings to effortlessly fly and glide through the sky, and are capable of sharp movement when airborne. Their massive teeth and claws are sharp and dangerous, easily capable of tearing through metal. 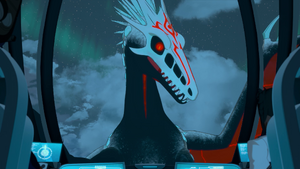 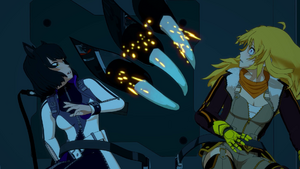 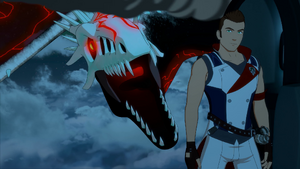 A Teryx roaring at Clover Ebi 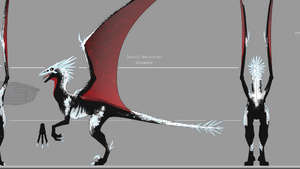