To be a singer like her mother and prevent Mitchie from singing in the Final Jam competition (in the first film; failed).

To win the Final Jam competition (in the second film; failed).

She was portrayed by Meaghan Jette Martin.

Tess Tyler has attended Camp Rock every year, and is known as its "diva", partially due to her renowned talent, but also due to her arrogant behavior. Tess aspires to be a singer like her mother, and often tries excessively hard to make everything she does perfect, even if she hurts other people in the process. The reason for this behavior is because her mother is often too busy with her career to spend time with or even notice her. Tess first meets Mitchie when she arrives at camp and tries to be friends with her, inviting her to stay in the cabin that she shares with her "followers", Ella and Peggy. However, when Tess hears Mitchie sing, she immediately sees her as competition, which she hates. Asking Mitchie to join her girl group, Tess casts her as a backup singer to stop her light from shining.

Tess also has a crush on Shane Gray, who has been sent to camp to get his act together. When she sees that Mitchie and Shane are getting closer, she hatches a plan to tell the camp that Mitchie's mother is in fact the camp cook, and not the president of Hot Tunes China as Mitchie has been claiming. The plan succeeds, turning most of the campers against her. As a way to further keep Mitchie out of her way during the Final Jam, Tess frames her for stealing her charm bracelet. During rehearsal for her performance, Tess begins to verbally abuse Ella and Peggy for failing to follow the dance steps to the letter, which proves to be the final straw; Peggy loses her temper and gives Tess a verbal scalding before walking off in a huff, and Ella quickly follows suit, leaving Tess to perform her number alone.

While on stage, Tess sees her mother in the crowd, but her joy is quickly ruined when T.J. is distracted by a cell phone call. Succumbing to nervousness, Tess trips and nearly falls off the stage, failing the contest. Completely heartbroken over her mother's distraction and her failure, Tess retreats backstage in tears. When Peggy enters as a final contestant and wins, Tess congratulates her, and after seeing Mitchie and Shane sing together, apologizes to the former for her actions.

In the sequel, Camp Star's top performer, many campers, including former Camp Rock diva Tess Tyler, decide to leave Camp Rock and join Camp Star along with many of the staff after Axel promises to double their salaries. Tess quickly becomes partners with Luke on all of Camp Star's performances. Although they sing very well together and look like they make a great team onstage, they constantly fight over the spotlight and believe that competition is all that matters. Later, despite the loss, Camp Rock's performance earns great applause from the crowd and Tess is shown to feel bad about the win as she knows Camp Rock deserved it. The remaining Camp Rock staff and campers return to Camp Rock and gather and sing around the campfire one last time together. As they enjoy themselves, many of Camp Star's campers including Tess and Dana show up having seen the bonfire and ask to join in. Led by Tess, some members of Camp Star except Luke request to go to Camp Rock the next summer because it is much more fun than Camp Star, meaning that Camp Rock will have enough campers to stay alive for another summer.

Tess is shown to have long blonde hair which she wears curly or straight but always loose. Her wardrobe is shown to be sequin or silky dresses or T-shirts with jeans or tights but she mostly wears dresses in the first movie. In the second movie she has upped her style to a more colorful wardrobe she also now has a fringe and wears mostly t-shirts and jeans.

Tess enjoys singing, but would never sing unless it is a solo performance, which is shown strongly in Camp Rock 2: The Final Jam when she is constantly clashing with Luke Williams. In the first film, Tess is shown to be controlling, arrogant, vain and a stereotypical popular mean girl. She is also rich as she she shown to be driven around in a limousine. However, after Peggy stands up to her and Tess is let down once again by her mother, she somewhat begins to be a kinder person. In the second film though, she is shown to still be vain when she instantly switches camps and turns her back on her friends, throughout the film however she is shown to regret her actions and generally misses and cares for her friends, this is shown when she comforts Mitchie after their loss to Camp Star and at the end of the film returns to Camp Rock and apologizes.

Tess is close friends with Ella Pador and Margaret Dupree, she quickly welcomes Mitchie Torres into her group after being impressed by her lie about her mother's job. However after finding her out to be a liar, she publicly humiliates and rejects her. After Final Jam, she apologizes to Mitchie and they begin again on better terms. Tess was once best friends with Caitlyn Gellar, however they fell apart after Tess' jealousy and arrogance came into play; however after Final Jam she and Caitlyn reconciled on their friendship, though this time not as close. Following her switch to Camp Star, Tess became friends with Dana Turner. 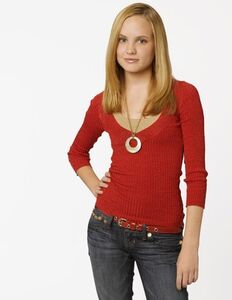 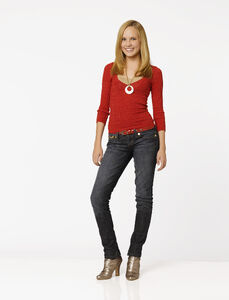 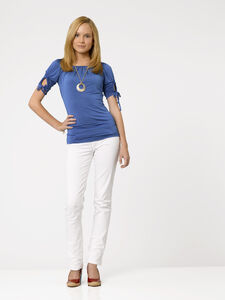 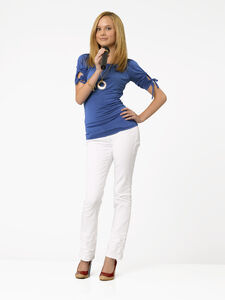 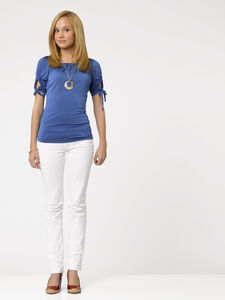 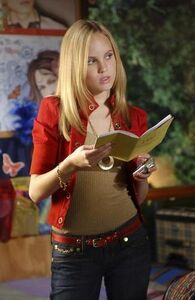 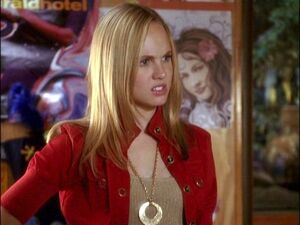 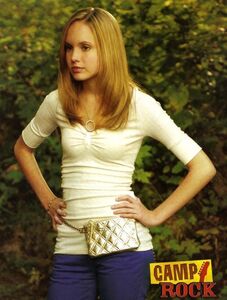 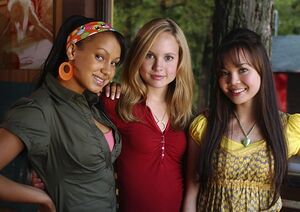 Tess and her friends Peggy (left) and Ella. 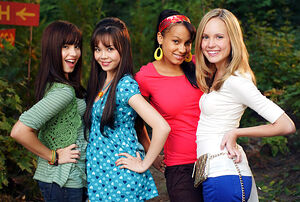 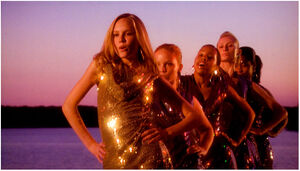 Tess singing "Too Cool" on stage.