The Tethered versions of the Wilson family are the secondary antagonists of Jordan Peele's 2019 horror film Us.

Much like with the other residents of Santa Cruz, the Wilsons had their own Tethered doppelgangers. After being kidnapped and trapped within the Tethered society by the fake Adelaide, the real Adelaide/Red is forced into marrying Gabe's Tethered against her wishes and according to her, she was forced to conceive both of her children -- Umbrae and Pluto respectively -- and had perform a Cesarean section on herself without the assistance of anesthetics to give birth to Pluto. During that time frame Red had become the leader of the Tethered and formulates a plan to take over the surface world by killing all of the people above ground, coining it "the Untethering." She then spends the remaining thirty years preparing the Tethered for this task.

After returning home from the beach, the Wilsons' Tethered infiltrate the house and Red appoints each of them to divide the family while she dealt with her doppelganger. Abraham takes Gabe on a boat ride with the intention of throwing him over board; Umbrae is made to chase after Zora, and eventually kills a bystander; and Pluto forces Jason to play with him only to get trapped in the closet after Jason demonstrates his magic trick to him. Gabe manages to escape the bag Abraham trapped him in, and after forcing him into the water, Gabe kills him by remembering how to activate the boat's motor engine. While trying to escape from the remaining Tethered, Zora tries to run over her Tethered, Umbrae, with the car that they had taken from the slain Tyler family. Whilst attempting to break her way into the car through the windshield, Umbrae kicks the car into gear and stops abruptly causing Umbrae to fly into the trees, badly injuring her. The fake Adelaide left the car to wordlessly comfort Umbrae before she died, her psychotic smile never faltering.

Deciding to escape to Mexico, the Wilsons try to retrieve their car only to realize that Pluto had set the car on fire, gasoline seeping across the road. Learning that Pluto was luring them into a trap, Jason forces him to mimic his actions and tricks him into walking backwards into the flames of the burning car. Red then kidnaps Jason as a way of coercing her Tethered to find her and after getting killed by her, the Wilsons escape Santa Cruz.

Abraham: The brute of the family, Abraham follows orders and can perform tasks competently but superficially behaves like a barely cognitive ape who communicates via screaming and roaring whenever enraged or excited. He's obedient only towards Red and despite his sociopathic nature, is also very cheerful and merry. He can act stern and intimidating if his family is threatened, however, and despite being inarticulate, he is obviously smarter than he lets on. He often appears robotic and stoic at times but this gives way to explosions of rage and also excitable and happy mood swings.

Umbrae: Perhaps the scariest of the tethered Wilsons, Umbrae lives for the thrill of the hunt and is very focused, sadistic, and playful, making a toy of her victims and psychologically abusing them before moving in for the kill. Even Red refers to her as a monster, which Umbrae simply seems to take as a compliment. Umbrae is also so determined no amount of physical trauma can stop her machine-like determination.

Pluto: A bizarre dog-person, Pluto is incredibly disturbing to watch but also the most benign member of the group. Despite his love of fire, he only follows orders and when left to his own devices, is generally peaceful and sociable. He comes off as very disturbing but beneath it all he is innocent and child-like. 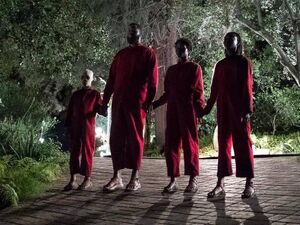 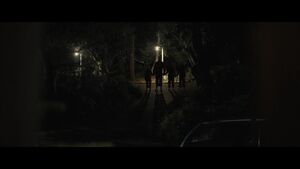 The Tethered Wilsons outside the house, holding hands in unison. 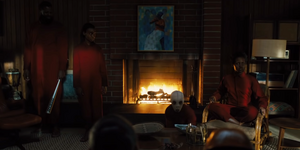 Inside the house, looking at their counterparts.