Tetsuo Shima is the main antagonist of the 1982 manga Akira and its anime film adaption.

He was voiced by Nozomu Sasaki (who later voiced K9999 in The King of Fighters and Kagehisa Anotsu in the 2019 remake of Blade of the Immortal) in Japanese and Jan Rabson and Joshua Seth in English.

One of the youngest members of a motorcycle gang led by his best friend, Shotaro Kaneda, he initially has problems with being seen as little more than an inexperienced "junior" member, weak and introverted. Kaneda is his lifelong best friend. He is perceived both by himself and others, somewhat, as a runt, though this is not necessarily a correct assessment of his character. His misdirected views and intentions constantly lead to conflict with all the other characters, and he is stubborn and naive about the consequences of his actions. He is enthusiastic and rapturous about motorbiking, but can't seem to "catch up" to his friends much of the time.

Throughout the story, he reflects more openly on feeling bossed around by others and begins exhibiting an inferiority complex. It is only when he is injured and later incarcerated by the government that he is left helpless and on his own, and begins to take on an extremely corrupt, arrogant, and degenerate attitude, absorbed in his new powers as a result.

One night, during a gang war with the Clowns gang, Tetsuo suffers an accident after almost hitting a young boy named Takashi. While the gang was arrested, Col. Shikishima took Tetsuo to a lab. They saw during this time, that Tetsuo was beginning to have intense powers.

After Tetsuo awoke, he ran out of his hospital bed and told his girlfriend Kaori to leave town with him. They unsuccessfully stole Kaneda's motorbike and are intercepted by Clowns members. When Kaneda arrives, Tetsuo goes nuts and admits that he won't always be on the receiving end. He then suffers a breakdown and is taken away. That night, Tetsuo was attacked and tortured telepathically by the Esper children, who used models and toys to try and kill Tetsuo.

He then used his new powers to kill security guards, and staff trying to keep him from the Baby Room. After a short battle, Tetsuo discovered he could also fly. At the Harukiya bar, he kills the barkeep then Yamagata. Tetsuo then began a rampage to find Akira as he kills soldiers, and destroys army vehicles. Most of the citizens of Neo-Tokyo believed Tetsuo to be Akira. Upon realizing Akira was dead, Shikishima decided to use the SOL satellite on his subject. With his right arm severed after a fight with Kaneda, Tetsuo sends the SOL out of orbit. He then retreats to the Tokyo Olympic Stadium but then begins losing his control over his powers. Eventually after Kaneda's arrival, Tetsuo mutates into a monstrous mass that kills Kaori and almost kills the colonel and Kaneda. Akira then somehow awakens thanks to the Espers and then takes Tetsuo with him. Before the credits, you can hear Tetsuo saying "I am... Tetsuo.". 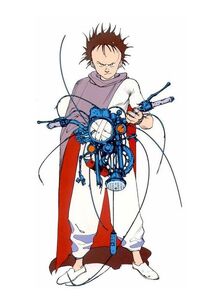 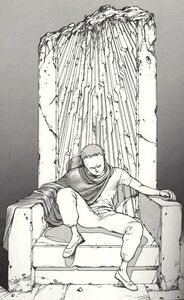 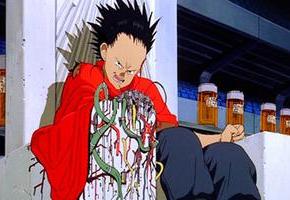 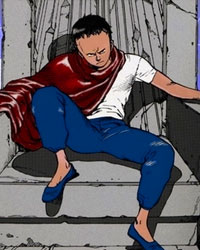 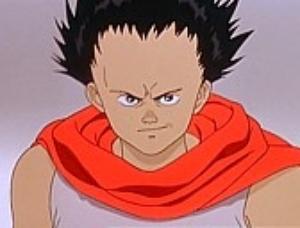 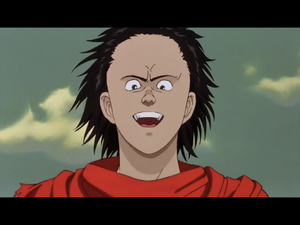 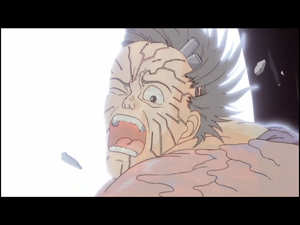 Tetsuo being sucked into the universe.