Determination
Able to use a harpoon

Professor Tomaso Tetti-Tatti, also known as Professor Tetti-Tatti or just Tetti-Tatti, is a character from Disney's 8th full-length animated feature film Make Mine Music. He is the main antagonist in the segment, The Whale Who Wanted to Sing at the Met.

He was voiced by the late Nelson Eddy.

Tetti-Tatti appears to be caucasian, heavy set, with white hair around a balding scalp. He wears a black tuxedo with a white undershirt and a black tie. He has large grey pants. He also has a large nose, a small mustache, and a monocle.

He later wears a green coat and a pink hat when on the ship.

Unlike most Disney villains, Tetti-Tatti is not evil at heart. He is an intelligent man and a talented Impresario. After hearing news of a singing whale, Tetti-Tatti did his research to wrap his head around the phenomenon. He decided that the most logical explanation was that the whale had swallowed a singer, and so he tried to save them.

Tetti-Tatti seemed to show genuine concern for the "victim" that he assumed to be inside the whale's stomach, reassuring them that he would save them. He eventually lost sight of this at the very end of the story, cheering for having beaten the whale but not attempting to save his hypothetical victim.

Even at the end of the film the narrator tells the audience not to be mad at Tetti-Tatti, because even though he committed an atrocious act, his heart was in the right place.

Tetti Tatti is a Impresario, meaning he owns a theatre and searches Opera singers to sing. Upon hearing rumors of sailors hearing opera singing when Willie the Sperm Whale swims by, Tetti Tatti gets the idea from the story of Jonah and the whale, that there must be an opera singer inside the whale singing for help.

Managing a ship and hiring a crew, Willie became intent on killing Willie the Sperm Whale, who he believes is nothing but a monster holding the singer captive.

Willie is actually a kind, gentle creature who only wants to become famous for his singing voice. Willie dreams of singing in the opera one day and practices for other creatures in the sea.

When Tetti-Tatti and his crew finally find Willie, the crew is captivated by Willie's voice, realizing there is no opera singer inside and begs the captain not to kill him. Unfortunately Tetti-Tatti doesn't understand and continues trying to "rescue" the singer by trying to hunt Willie.

After Tetti-Tatti harpooned Willie, Tetti-Tatti's Sailors angrily jumped on their leader and restrain him. Afterwards it is implied that Tetti-Tatti found out that there was no opera singer meaning he had murdered Willie and rescued no one.

The narrator softens the blow by telling the audience not to be mad at Tetti-Tatti because he simply didn't understand, and also that Willie continues to sing in heaven. 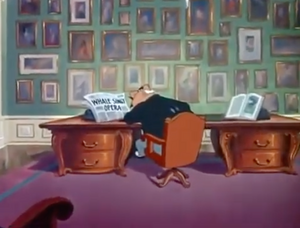 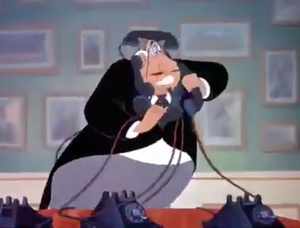 Calling about his hypothesis. 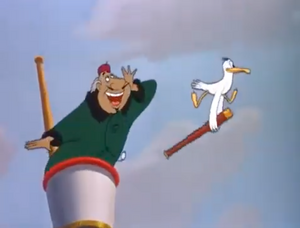 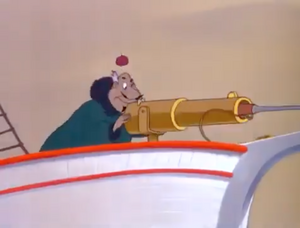 Aiming a harpoon at Willie. 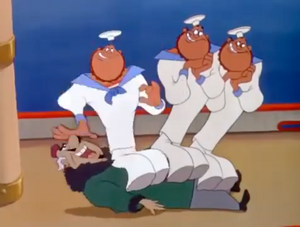 Being sat on so that he doesn't shoot. 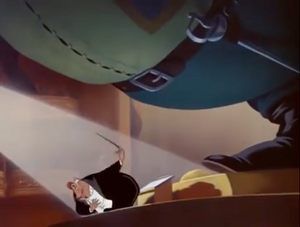 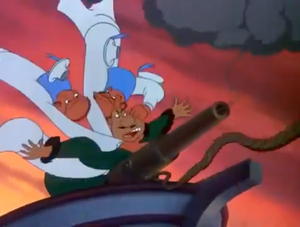