Destroy the theater with an old fashioned pear-shaped wrecking ball stolen from someone's antique collection to drill for oil underneath it (failed,formerly).

Tex Richman is the main antagonist of the 2011 live action Disney film The Muppets.

He is an oil baron and his goal is to destroy the Muppet Theater with an old fashioned pear-shaped wrecking ball that is stolen from an antique collection so he can drill for the oil which, in the film, has been recently discovered. He personally hates the Muppets and, according to his description on the film's website, he blames them for an unfortunate event at his tenth birthday party.

He also has an inability to laugh and has vowed to destroy them. He is assisted by Uncle Deadly, Bobo the Bear, Statler and Waldorf, and eventually, The Moopets.

He was portrayed by Chris Cooper, who also played Frank Fitts in American Beauty, Norman Osborn in The Amazing Spider-Man 2, and Alexander Conklin in The Bourne Identity.

In his play "Let's Talk About Me", he reveals that during the 1970s, they performed during his birthday party (either they were on TV or were physically there). However, when the guests laughed, Tex himself found out that he couldn't laugh. Therefore the guests laughed at him. This would haunt Tex into adulthood as his inability to laugh. Tex would grow up to be an oil tycoon with revenge against the Muppets in his mind.

In the film, he first appears in Kermit's old office, where Statler and Waldorf show him the deed to the Muppet Theatre. He buys it from Kermit, telling him it will be turned into a Muppet Museum, when he actually plans to drill under it for oil. Walter, the Greatest Muppet fan, overhears this, and, after much screaming, tells his brother Gary, and his girlfriend, Mary about the villainous plot.

They decide to help them, and go looking for Kermit to warn him of this danger. But Kermit accepts the fact, due to the Muppets splitting up years ago. But, after a song later, Kermit and Walter cook up a plan to save the theatre by raising money with a telethon at the Muppet Theater.

At first, Richman believes this to not be a treat, and since no one now knows who the Muppets are, which leads them to ask Richman for their Theater back. But he refuses and reveals that he not only owns the Muppet Theater but the Muppets name as well, and will use it to make money off of a edgier Muppets, called the Moopets.

But, to his surprise, they succeed and make the telethon work, and Tex cannot let this happen. So he drives to the Theater and then plans to cut the power off to the Theater, and almost succeeded if Mary wasn't a good mechanic. But Uncle Deadly stops him, admitting he hates being a stereotypically villain, and deep in his heart he's a Muppet, and then he pushed Richman off the roof. He soon wakes up. Disgruntled, he steals Kermit's car and destroys the power, then taunts the Muppets on their presumed defeat, foolishly proclaiming he’s won, even when Kermit thought he was right, he was actually wrong (resulting Kermit and the others to start their career over as a family). But, like most villains, his plan back fires, and the Muppets return to stardom.

During the celebration of the Muppets' return, he redeems himself and forced to give back the Muppets Theater as well finally being able to laugh, though Gonzo's bowling ball hitting him in the head may have something to do with it. Though, his minions, The Moopets were not happy, as they started demanding money from him over their "deal". He is also shown singing "Mahna Mahna" during the credits.

While he does not appear in the sequel Muppets Most Wanted, he is mentioned in the opening number "We re Doing a Sequel", during which the Muppets all pitch ideas for the plot of the film. Fozzie suggests that it should be about "The Muppets getting back together again to stop an evil oil baron from demolishing the old studio", to which Kermit questions if Fozzie even saw the previous film. 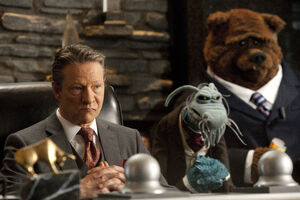 Richman with Deadly and Bobo